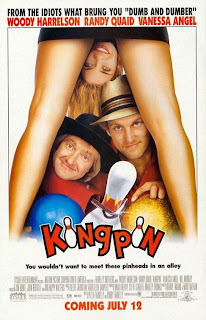 Roy Munson was once a top notch young bowling talent, but the sneaky Ernie McCracken persuaded him in participating at illegal gambling pretending to be drunk. When the gamblers discovered Roy's real identity, they got angry and cut off his hand with a ball-return machine. 17 years later Roy is a washed up salesman with a rubber hand, but finds a new friend, the naive Amish Ishmael, and goes on to train him for the bowling tournament in Reno, teaming also up with Claudia. When Ishmael breaks his hand, Roy goes on to participate himself, but gets beaten by Ernie. Still, he gets the girl, Claudia, and earns enough money with a commercial for condoms.

Many movies get instantly dismissed for their subject, but some of them cause a slight feeling of bad conscience because of that and tend to stimulate the viewer to see them again and maybe have an open mind when judging them next time. "Kingpin" is one of those cult films, a vulgar comedy for the masses, yet unlike many other examples of it's genre, including some also directed by the Farrelly brothers themselves, it can't be just that easily dismissed as a "guilty pleasure" but simply as "pleasure" without the guilty part because it's so much fun and has enormous sympathy for the outsiders taking over the leading role. Indeed, some gags fail and many are unoriginal or shaky, but there is still something unbelievable in this film: Woody Harrelson copes kinky as the main hero with a rubber hand, Bill Murray isn't at all bad as the bad guy, the Farrelly brothers have occasionally an excellent directorial timing while some jokes are to cry from laughter - like the scene where Roy puts on his suit but accidentally rips his sleeve with his hook, the cobra that bites it's owner on the forehead or when during the suspenseful “neck-on-neck” bowling tournament Ishmael can’t stand the anxiety, says: “I can’t Look!” and plunges his head into a deep cleavage of some woman – thus it’s hard not to enjoy the film at moments, while the humane touch even gives it that special flair.