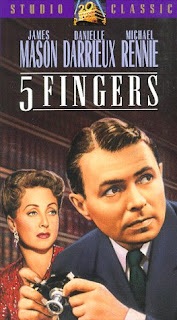 Ankara, World War II. Von Papen is a German ambassador who accidentally meets Staviska, the Polish countess in exile. His assistant Moyzisch discovers spy Diello in his house who sells him secret British documents for 20.000 Pounds. Diello is namely the butler of the British ambassador and thus easily steals documents from his safe. He gives all the money to the countess with whom he plans to escape to live in South America. But one day she flees with the money so Diello steals the plans for operation Overlord and hands it over to the Germans, but they don't trust him and consider him a British spy. In South America, Diello realizes his whole money Germans payed him was counterfeit.

"5 Fingers" start rather unusually: in '50 a member of the Parliament asks his superior, holding a (real!) spy book "5 Fingers" and asks: "Is this true?", upon which he answers him with yes and then lets the film go back in regression to go on to tell the whole story revolving around 'Operation Cicero'. It's a matter of a cold, calculated but suspenseful and intriguing spy thriller of Hitchcock's caliber who was even nominated for an Oscar for best director and screenplay, while it won the Golden Globe for the latter category. It's interesting to note that director Mankiewicz doesn't portray the main (anti)hero, spy Diello as a bad guy or a traitor but as a neutral character who did everything to manage in life, whereas the character of the countess is truly one dimensional and blurry on the other hand, since she betrays him and gets removed from the story even though she always acted like she loved him, but she was added by Hollywood producers subsequently in the film anyway. "5 Fingers" isn't exactly a classic - it's doesn't stand out from it's time - but the suspenseful finale in which the Nazis protect the hero from the British is especially well made.