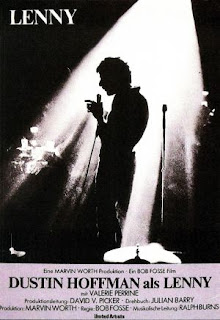 Lenny Bruce was a lousy stand-up comedian somewhere in the 1950's. He met the wild striptease dancer Honey and married her, much to the dismay of his mother. When he accidentally swore at one of his performances, his boss ordered him to apologize, but he quit and took Honey with him. They had a car accident and landed in a hospital, where he met a nurse and had an affair with her. Continuing his stand-up routine at a poorly known striptease club, he got the offer to do his own act. Becasue of his swearing, satire towards the government and controversial views, he was arrested several times. He died in '66 from an overdoses.

Excellent black and white biopic drama with bitter humor, "Lenny" is a powerful and controversial film that has implications that seem pragmatic today, from the right of free speech, the pressures of society and a revolutionary individual who the more he had trouble with the authorities, the more popular he became. Dressed in the typical "rise and fall" structure of these kind of films, nominated for 6 Oscars, 3 Golden Globes and winner of one BAFTA (best newcomer Valerie Perrine), "Lenny" is crafted in the brilliant 70s film making style that combines static mood with powerful dynamic energy, and director Bob Fosse didn't fall into the trap of showing sympathies towards the title protagonist: Lenny Bruce was vulgar, profane, rude, juvenile and impolite, but unlike other swearing delinquents he had something to say, while at some point of his career he acted less like a stand-up comedian and more like a philosopher. As he said himself in the film: "My sole economic success is based on violence, despair, disease and injustice. If by some miracle all of them would disappear, I would be unemployed. So I'm not a moralist". Even though the movie is rather overlong and slightly convoluted, it has merits while Dustin Hoffman is excellent as the main protagonist, in every kind of gags he spoke, from the nasty ones ("F*** you." Never understood that insult, because f***ing someone is actually really pleasant. If we're trying to be mean, we should say "unf*** you!") up to the childish ones ("How many asses sat on this chair? Nobody knows. But the lions and the tigers know. That's why every time Buck goes 'Wa! Wa!' with the chair, they go 'Blah, Blah'!").