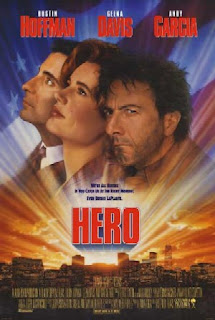 Bad luck Bernie Laplante lost his job, his ex wife doesn't let him see his son and now he is on court for robbery. When in front of his nose a plane crashes, something stimulates him to save over 50 passengers, but he is still indifferent and leaves without telling his name. When reporter Gale finds his shoe, a false hero shows up, the poor John, thus the media makes a star out of him. Now suddenly Bernie isn't indifferent anymore, but Gale doesn't believe his story. When John wants to jump off the building Bernie advises him to keep on lying and just give him the part of the money he earns, thus leaving everything is status quo.

Stephen Frears' "Hero" is a well conceptualized story on the verge of Sturges' similar "Hail the Conquering Hero", but it's realization falls into indifference and uneven mood. The screenplay didn't pull all the right strings which caused the character Bernie, played by Dustin Hoffman, to slowly get lost in the background somewhere half way into the film, while the supporting characters took over his main word. That way, despite all the clever sharpness and cynicism, this isn't as satisfying as some other satires with a similar premise about a false hero taking over all the credit. Ironically, Bernie's character in the story wasn't interested in glory or the truth up until the point where the offered award wasn't given to John, who is, in a nice twist of cliches, otherwise a surprisingly honest and kind person, but the feeling of overall helplessness and mean spirited fate with time starts to become rather irritating, which in the end causes the film to turn rather unpleasant. It's a little known fact that comedian Chevy Chase actually delivered a very fine, but uncredited role as Deke, Channel 4 News Director with glasses, but Hoffman and always charming Geena Davis are also not to be dismissed.

I agree. A good film, even though I was slightly bothered by some elements in it.