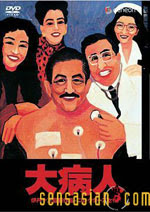 Old director Buhei Mikai directs himself in his new film as a fragile patient who suffers from cancer, but when he checks in at the hospital Dr. Ogata really discovers that sickness in him - except that he thinks it better not to tell him in order to keep him "optimistic". That way Mikai spends months and operations in hospital blissfully ignorant and confident he only has light indigestion problems. But after medicine causes his hair to fall off, he realizes he is terminally ill. In a few minutes of death his soul meets some people and returns back to life. From that moments on he decides to film his last scene: in his bed, surrounded by his film crew and wife, he dies.

Incomplete and vague, "The Last Dance" took directions and elements fatal for it's subject. Originally planned as a satire about Japanese doctors and their attitude towards their patients whom they keep blissfully unaware of their terminally ill sickness, the story later on takes heavy melodramatic tones that are truly pathetic and unpleasant, while all the emotions are one sided, which cause the author's ambitions to crash. In the exposition, in which the protagonist, actor/ director Mukai, overacts playing a sick man on some film, fulfilling all the norms for kitsch, and then asks: "Did I maybe exaggerate?", the director Junzo Itami seems as if he is himself ridiculing that kind of a soap opera approach and knows better, but his end of this film doesn't make any kind of difference towards the better approach. Rentaro Mikuni is great in the leading role, but the more his hero gets sicker, the more the movie gets sicker too. The mystic parts also seems rather confusing and out of place - there are a few scenes where special effects that show the sick hero levitating above unusual landscapes, before he returns "back to Earth" - and just enhance the feeling of overall whimsical mess.