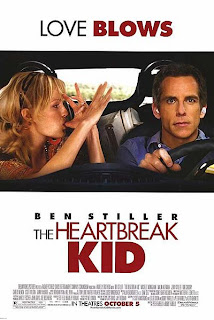 San Francisco. Eddie is over 40 and slightly worried he will never find a woman of his life. At the wedding of his ex girlfriend Jodie, he decides to find a wife as soon as possible. He meets the blond Lila, an environmental researcher, and quickly marries her. Yet at their honeymoon in the Mexican town Coba Eddie discovers Lila's bad side: she is annoying, loud, obnoxious, 26.000 $ in debts and is weird in bed. At the same time he meets the charming Miranda and falls in love with her. He decides to divorce Lila, yet Miranda is shocked to find that out and marries Cole. 18 months later Eddie returns to Coba and meets Miranda again, who divorced and also loves him.

After three "polite" comedies where the Farrelly brothers showed their gentle side, they returned back to their vulgar form in "Heartbreak Kid", a remake of the '72 film with the same title. Sadly, they didn't escape the curse of remakes who are mostly weaker than the original. The film starts out surprisingly well: Eddie, played with the typical outsider/ underdog style by Ben Stiller, is a slightly depressed bachelor who attends the wedding of his former girlfriend Jodie, almost jealously observing her new husband. Jodie even gives a speech stating: "I had to kiss a few frogs before I found my prince charming", making Eddie so uncomfortable he has to take all his power to not make any reaction and pretend he doesn't care. As it's mostly the case with the Farrellys, the story once again shows the outsider hero and the typical problems he has with narrow provincial attitudes all around him, yet once the honeymoon with his "wrong" wife Lila starts, it slowly falls apart. Disregarding two pointless and stupid sex sequences, the story still has charm and occasional sharpness in showing how perfect Miranda is, but the jokes are only moderately funny and the film looses too much steam in the second half. It still has charm, especially in a few emotional scenes and a refreshing end, yet the disturbance caused by so many wrong decisions, dumb ideas, imitations of Stiller's bad luck guy formula from "Meet the Parents" and discrepancies simply reduces it's quality and catapults the whole film into irritating chaos.