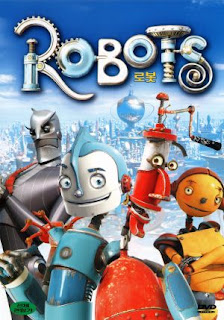 In a world populated by robots, Rodney is a young robot who seeks to become an inventor. He leaves his parents - his caring mother and father the dishwasher robot - and heads for the Robot City to place his invention, a small robot which can help doing chores, to Bigweld, the "greatest robot in the world". But Bigweld has isolated himself, while his company is now run by the evil Ratchet who wants to maximize profit by ending the production of replacement parts and forcing everyone to buy the new 'upgrade' version. Rodney meets Fender, Piper, Lug, Crank and Diesel and stops Ratchet by motivating Bigweld to return to run his company once again.

CGI comedy "Robots" from Blue Sky Studios is an interesting film about the underdog trying to change the world, but one can't shake away the feeling that it's just a kid's cartoon that tried to copy too much from similar Pixar Studio films about characters set in alternate worlds. The animation is top notch, some visual ideas are neat and there are traces of subversion set sporadically, which gives the film a nice touch, but at moments it was obvious the authors tried too much to be 'hip' and 'cool', instead of simply giving their story substance and quality - as with many completely CGI films, this one also seems artificial instead of artistic, making only a handful of robot characters seem as if they have a soul, like the irresistibly charming Piper, voiced by Amanda Bynes. The film starts on a clever, almost satirical note - young robot parents "get" a robot baby by assembling it, and the father adds: "He has my mother's eyes and my father's nose. I knew it was a good idea to keep those spare parts". The baby eventually becomes a grown robot, Rodney, who head-on enters the big Robot City inhabited by numerous funny characters - in one scene he meets a shady robot trying to sell him some "fishy" merchandise, showing him his arm with numerous watches who all say: "Don't buy us. We are counter fit" - and many unfunny ones, especially the irritating red robot Fender who is in the long list of annoying hyperactive cartoon characters to have been probably inspired by "Looney Tunes". The authors go a little bit overboard with their too fast pace, placing even a couple of misguided jokes referenced by the modern culture (Fender "hits" the bad guys by dancing in tune to Britney Spears' song "...Baby One More Time"; Aunt Fanny has a gigantic butt which is bigger than her whole body...) and incorporating some lousy modern mannerisms from everyday life, but overall it's a fun, easily enjoyable flick.