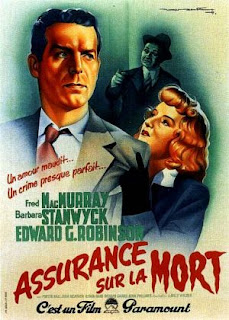 Los Angeles. Walter Neff works in a insurance company and always admires his boss Barton Keyes who discovers every attempt at fraud with his hunch he calls his "little man". One day Walter goes to prolong the car insurance at the Dietrichson family, yet falls in love with Phyliss, the wife of the Mr. Dietrichson. She starts and affair with him and persuades him to kill her husband in order for them to pick up 100.000 $ from the insurance company. Walter kills her husband and dresses up in his suit in order to enter a train. In the middle of the ride, he jumps from the rain and places the corpse on the tracks to make it look as if Mr. Dietrichson died in an accident. But Keyes becomes suspicious. Walter realizes he made a mistake, kills Phyliss and admits everything to Keyes over a Dictaphone.

Nominated for 7 Oscars, film noir "Double Indemnity" is an excellent, thoroughbred achievement of the genre and a defining classic in which the master of comedy, Billy Wilder, took a successful attempt at the serious territory. The story about a femme fatale who persuades her lover Walter, in a role that remained Fred MacMurray's finest, to kill her husband was later on copied and imitated a thousand times, and a stiff start and a couple of foolishly silly dialogues don't seems promising at first, yet Wilder unfolds the plot so meticulously and expertize that almost everyone will be convinced he or she saw a great film. The way the egoistic couple executes the murder and their fraud, making it seem like an accident in order to get a "double indemnity" clause and cash in double at the insurance, was lead flawlessly intriguing, with passionate movie details (for instance, before he leaves, Walter puts a some paper on his bell in his apartment in order to see if someone contacted him while he was away). The role of his life was also achieved by Edward G. Robinson who plays the clever Barton who somehow can't go wrong in uncovering suspicious frauds with his "little man" who tells him everything.