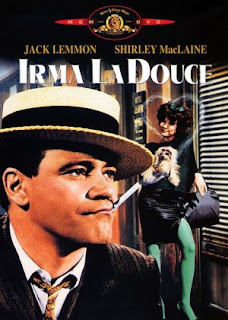 Equipped with green socks, 'Sweet' Irma works like a prostitute in Paris. In order to squeeze more money out of her customers, she tells them how she grew up in an orphanage. But then a new police officer arrives, Nestor, who without compromise arrests all prostitutes in his block, but also his own boss who just 'happened to be there', thus loosing his job. When he once again meets Irma, he starts a fight with her pimp and frees her. She falls in love with him and allows him to stay at her place. But Nestor is jealous at her men and gets an unusual idea: he masks himself as Lord X with a beard and pays her 500 Franks for harmless conversation just so that she doesn't have to work. After she falls in love with Lord X, he decides to get rid of the fictional character and escapes a police arrest. On the wedding Irma gives birth to a daughter, while Lord X happens to pass by.

Billy Wilder once again teamed up with Jack Lemmon and Shirley MacLaine and managed to craft a funny, but not entirely balanced prostitute comedy "Irma la Douce". The exposition is excellent: in it, the 'tough' cop Nestor wants to arrest all the prostitutes and thus turns the fire alarm on, upon which the hotel manager asks him: "Where's the fire?", whereas he takes a match and inflames his newspaper. Equally amusing is the naughty-sweet scene where Irma starts to take her clothes off while he quickly turns his head away in embarrassment. There are also many other trademark Wilder gags, but once the story takes a wrong turn it looses it's intensity, and that wrong turn is the stupid idea that Nestor disguises himself as some Lord X in order to visit Irma and give her enough money so she wouldn't have to visit other men, by which the film transforms into a discursively made masquerade that takes away to much time away from the real plot. Many critics don't even name that plot tangle in their reviews since it's hard to explain and too ridiculous, contrived and sugary. It would have definitely been better if Wilder had revolved the story around the brave subject of prostitute Irma and her marriage with Nestor which would have made more sense, but MacLaine is excellent in the leading role for which she was nominated for an Oscar, a BAFTA and won a Golden Globe.