The Super Dimension Fortress Macross: Do You Remember Love? 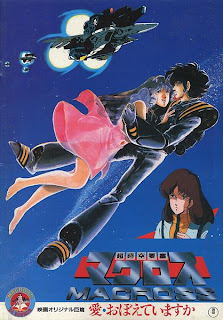 Zentradi, a humanoid race of alien giants that can be up to 50 foot tall, once attacked Earth and caused a space station, "Macross", filled with 50.000 people, to escape into space. Now pilot Hikaru lives on that station and one day saves singer Minmay, thereby falling in love. When the Zentradi attack again and kidnap Hikaru and Minmay, they realize that alien race is made all out of men - and that they are also fighting against Meltlandi who are all women. Hikaru manages to escape with Misa Hayase and return to Earth, which is devastated. They also find a hidden city and a terrible secret - humans themselves created Zentradis and Meltlandis! Still, the aliens change their ways and make peace with Minmay's song, destroy evil and restore Earth.

Profane product based on the successful anime series stopped half-ways. "Macross" the movie is one of the most influential cult animes that set new standards for the Sci-Fi genre in the 1980's, but looking at it today it seems dated since it should have been much more comprehensive and versatile. All of the space battles look the same, monotone and anemic, whereas the story has all kind of stuff going on but the only sequence that actually achieved something was the dramaturgic one, a quiet moment where Hikaru and his idol, the singer Minmay, are floating in zero gravity in Macross after a short circuit and simply talk. Too bad that's next to the only oasis of quality. Due to the hybrid tone this all seems like a 'refugee' version of "Star Wars", except that the aliens are all slightly more subtly shown and that there is still a reasonable, happy end, and also a little twist that imitates the one from the film "The Planet of Apes". There is some sporadic charm in the fact that the power of music and love overcomes evil, yet it was all done in such an uninteresting way, cheap animation and grey mood that it all doesn't mean much, even though a few years later on a more cheerful sequel was made to the story that spent a lot more time on character development. This is a cult classic, but today very few can really enjoy in it.