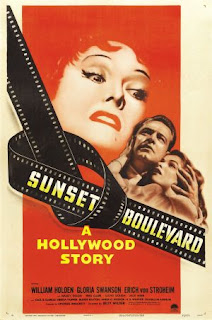 Former journalist Joe Gillis works in Hollywood as a screenwriter for cheap films. He isn't doing well and one day while running away from debt collectors hides with his car in a random parking lot of a big mansion. He discovers the estate belongs to former star actress of old movies Norma Desmond who hires him to polish up her script for "Salome" with which she plans a comeback. Joe quickly figures out the old Norma fell in love with him and is ready to buy him everything. The script gets handed over to Cecil B. DeMille who rejects it. Joe falls in love with the young Betty with whom he starts writing a new screenplay in order to leave Norma. But she shoots him and his body falls into her pool. With all the journalist taking pictures of her, she starts imagining she is once again a star.

Considering the fact how he deeply blackened and spitted on Hollywood, it's a real miracle that Billy Wilder managed to position his film "Sunset Boulevard" which won 3 Oscars (screenplay, music, set decoration) and 4 Golden Globes (best picture - drama, director, actress Gloria Swanson and music). In fact, the bitter story about the young, poor screenwriter Joe who becomes the obsession and object of affection of the old, but rich retired actress Norma created an interesting portrait of two outsiders who became victims of each other, implanting secret themes of transience, the critique of mainstream Hollywood and profit mentality that puts money in front of human dreams and desires. Already the sole exposition in which the hero gets killed in the pool but his voice serves as the narrator of the story is avandgarde and clever, with that "posthumous narration" idea getting imitated numerous times, from "Redentor" to "Desperate Housewives", while Wilder affirms the bitter tone but doesn't give up on humor (Norma's "ring" attached to a cigarette; a remark how even "rich people's kidney stone is worth 10 carets"; the famous last lines: "I'm ready for my close-up, Mr. DeMille."). Wilder neatly assembled many famous old movie stars in small roles, from Buster Keaton to Cecil B. DeMille, but as a whole the movie feels somehow distant, and not close, and it's structure is slightly messy.