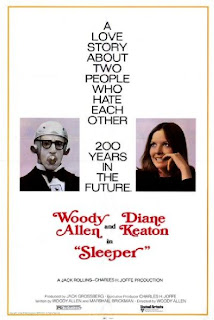 The year is 2173. The scientist wake up the artificially sleeping restaurant owner Miles Monroe who in 1973 came to a hospital because he had pain in his stomach but was frozen due to complications. Miles is in shock because he discovers there are no cities in the future, that fat and smoking are actually healthy and that America is ruled by a dictator, and since he is not registered he can serve the revolution. Mask as a robot, Miles hides at a girl called Luna and persuades her about his idea of a free America. He gets caught but Luna frees him and they discover the secret of the regime: the dictator died in an assassin attempt so his servants try to clone him with the help of his nose. Miles and Luna destroy the nose and fall in love.

After a bizarre debut and many "low-brow comedies" for the masses, Woody Allen continued with that trend with the Sci-Fi satire "Sleeper" which is very imaginative, and thus it's a pity that it's not that funny nor does it have some high quality since the story is so bizarre that it could have easily turned into one of his classics, but in no way does it "warm up" or ignite and it has a stiff start. The set design is Utopian and wonderfully exotic, from white clothes, vehicles without wheels up to buildings that look like a can, and it has plenty of clever gags, among the best one is a device that speaks with a French accent, the confession in front of a robot-priest or when the hero's flying device with which he planned to escape flies away, but on the other hand there is also an equal number of unnecessary gags that are very overstretched like giant vegetable or Allen's few dumb grimaces with which he tries to present himself as Stan Laurel.