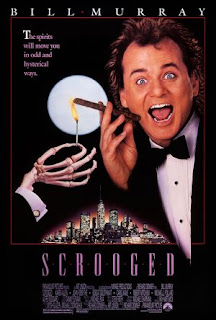 With only half-good heart does Frank Cross, the youngest executive of a TV station, plan to make a programme for Christmas. For Frank it's a time without emotions, thus he plans a new, live "Scrooge" version on TV filled with nudity and action. But before the start of the show, he gets visited by three spirits - the ghost of Christmas past, present and future - who all show him his sad childhood, egoistic present and even worse future. Even though their methods are unorthodox, they change him into a kind person and he reunites with his former love Claire.

"Scrooged" seems like if a few screenwriters have been so fed up with Charles Dickens' "A Christmas Carol" and numerous TV adaptations of the Ebenezer Scrooge character, that they decided to turn the whole thing upside down and have a field day by creating an over-the-top grotesque out of it—the sole crazy exposition in which a TV spot shows a wild film called "The Night the Reindeer Died" in which some militants start a siege of Santa Claus' home on the North Pole and Lee Majors (!) is there to help him, is worthy enough of a recommendation. The clips in the opening act are so bizarre and exaggerated that one of the executives, Eliot, compares them to a "Manson Family Christmas Special". The first half of the film works as a black comedy made with a lot of technical creativity, a few audacious jokes (when the Ghost of the Christmas past brings Frank to his house in the 50s, Frank protests: "You're taking me back in time to show me my mother and father, and I'm supposed to get all goosey and blubbery. Well, forget it, pal, you got the wrong guy!" - "That's exactly what Attila the Hun said.") and great make up which, ironically, despite its black humor, still captures the spirit of Christmas. However, the second half slowly starts to debase itself, falling apart due to a lack of sophistication in bringing its message across. Yes, the film has humor, but it is uneven in its meandering between light and dark elements, some gags misfire or are forced, the ghost of Christmas present (Carol Kane) is a little bit irritating, whereas Bill Murray is in great shape, but some of his spontaneous improvisations seem misguided (the Richard Pryor misfire), thus some will definitely not like the film as a whole. Still, some scenes, like the one where the grown up Frank Cross starts to cry when he spots himself as a 4-year kid who got a chunk of meat from his dad for Christmas, is somehow strangely touching, and it is thus a pity the movie is at times so heavy handed in trying to mend all those cynical jokes at the start into something more preachy. Just like the forced, but honest 4-minute long moral monologue of the protagonist at the end, the movie is somehow shaky, yet inexplicably satisfying at times.