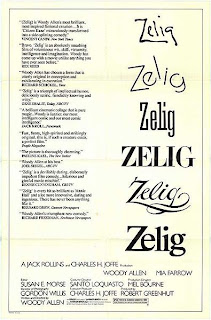 New York, early 20th century. A scientist noticed the mysterious Leonard Zelig who talked with Aristocrats like an Aristocrat, but with the servants like a servant. In a stadium he pretended to be a baseball player, in a Chinese restaurant he dressed up like a Chinese. Pronounced a chameleon, Zelig gets brought to an asylum where he gets treated by Dr. Fletcher. She has problems with him because every time she enters the room, he pretends he is a psychiatrist too. Still, she somehow manages to persuade him to develop his own identity, and not copy everyone else's. When Zelig's wife shows up they flee to the Third Reich where he pretends to be Hitler's associate, but in the end returns to the USA with Dr. Fletcher.

"Zelig", excellent and wonderfully conceptualized "biography" about a human chameleon from the title in the form of a black and white mockumentary, is a hidden jewel in Woody Allen's opus. Everything is completely absurd, experimental and without any emotional layers, thus there are such gags as a gigantic Hypodermic needle that throws out half a gallon of liquid or the hero walking on the wall due to hallucinations. Out of the screenplay, nominated for a BAFTA, about the hero who always copied everyone's identity because he is so insecure he never developed one himself, the author managed to pull out a maximum and the rhythm is tight. Among other great gags is the one where the narrator says how Zelig can transform into a Black man and an Indian, even though he is a Jew, thus the Ku Klux Klan sees a triple danger in him, and the hilarious sequence in which the media heard about Zelig's ability and made a whole bunch of merchandise out of him is a riot, from a "Chameleon dance", the song "Reptile Eyes" up to a caricature of him with 4 heads walking towards the gallows with four ropes. The black and white special effects that placed Allen in the middle of many famous historical celebrities are genius, as is almost every ingredient in the film, which once again shows his introverted and slightly hermetic, but incredibly creative talent.