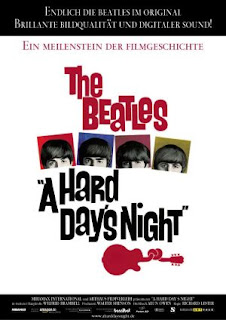 36 hours in the lives of the Beatles: they run away from a mass of fans and manage to take a train to London. There is also Paul McCartney's grandfather who is noble but likes to command everyone. Some passenger doesn't permit them to open the window so the Beatles search for fun and girls in the train. Finally in London, they get the assignment to participate a live broadcasting of their concert on TV so their manager begs them not to go anywhere but they go on to explore the city. Ringo befriends some kid and lands in the police station with Paul's grandfather. Paul, John and George get them out of there and they get back to the studio just in time.

1964 marked the first time the legendary Beatles appeared on film, the half-documentary comedy "A Hard Day's Night", released at the height of Beatlemania by the company "United Artists", which was nominated for an Oscar for best music and original screenplay. Director Richard Lester, who later on once again teamed up with the Beatles and filmed "Help!", shows their comic daily life in the style of French 'Nouvelle Vague' - at the beginning the quartet is running away from a mass of female fans, some of whom even fall on the floor from the sheer speed of the chase, even entering one car just to exit it and enter the next one. An amusing film in which the Beatles even say a few sarcastic dialogues ("He has a very high opinion about himself!"; after one arrogant gentleman says that he fought in war, they add: "And you're probably sorry you won, I bet") while the "story" contains an energetic youthful spirit that defies authority, John Lennon and Paul McCartney are wonderfully relaxed while the part of the grandfather is also neat (he accidentally showed up in an elevator in the middle of some medieval opera and interrupts the show) but as a whole the film also has occasionally a few unnecessary moments or episodic feel to it. But can you help it when the guys are so much fun?