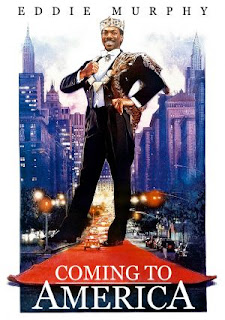 In the made up African country of Zamunda, there lives the young prince Akeem who has became fed up with his spoiled life of luxury and numerous servants who clothe him, wash him and even "wipe his butt". Together with his servant Semmi, he leaves for Queens, New York and pretends to be a poor student in order to find a woman who will love him without his money. He gets employed in the 'McDowell' fast food restaurant and falls in love with Lisa, the daughter of the boss, even though she is already in a relationship. When the king of Zamunda comes to Queens, Lisa discovers the truth, but still decides to marry Akeem.

Eddie Murphy is undeniably a great comedian, but even his biggest fans will have to admit that he made only a handful of great films that actually back-up his talent. And the charming "fish-out-of-water" comedy "Coming to America" is one of them. Even though even that film has flaws, from unnecessary profanity that wrecks the mood, a few misguided crude humor gags or the tendency to indulge the masses, director John Landis still managed to craft a very good romantic comedy that in the second half actually becomes a touching, mature romance with wonderful rhythm, from the magical opening song "Mbube" from Ladysmith Black Mambazo up to such childish jokes that actually have a naive punchline like the one where the king of Zamunda enters a barbershop with an opulent clothing made out of an obviously real stuffed lion while the goofy Saul can't resist but to ask nonchalantly: "Oh, this material is great. What is it? Velvet?" There's even a neat inside gag where Don Ameche and Ralph Bellamy make guest appearances and reprise their roles of Mortimer and Randolph, the two broke millionaires from the previous Landis film "Trading Places", which is a great idea of using the same characters in many movies. The sole concept—a rich prince wants to find a woman who will love him for his personality, not for his money, so he feigns he is a poor student, and is even willing to give up his entire kingdom just to live with her—is incredibly sweet; the ending is especially well made; Murphy is having a field day dressing up in three other characters besides the prince Akeem— musician Randy Watson, the old barber Clarence and his old White (!) companion Saul—and Arsenio Hall is also hilarious, which in the end make this film a pleasant surprise.