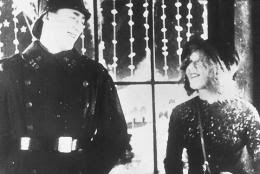 During the cold winter, Karen, a poor girl, is trying to sell matches on the street, but nobody wants to buy any. She observes a party of some wealthy people through the window and gets hit with snowballs from some kids. But a policeman shows up and chases them away, saving her. Not daring to go home since she didn't sell a single match, she stays on the street and falls into a dream world full of puppets in a castle. She meets a nice soldier, but then death appears and chases them on a horse through the clouds. Some time later, people find her frozen on the street.

Silent adaptation of Hans Christian Andersen's fairy tale of the same title, "The Little Match Girl" is a quality made 40-minute short film that appeals mostly thanks to Jean Renoir's skillful directing and the absolutely charming leading performance by his wife, Catherine Hessling, even though some complained that she is a grown woman, not a little girl, but that doesn't reduce her overall charisma and sympathetic gestures. The tragic story about a neglected, poor girl of whom nobody cared off didn't loose any of it's touching poetry in this version, even though it's obvious the movie isn't anything special by today's standards, even though it contains a few magical moments, like the one where some cruel kids were throwing snowballs on Karen but some policemen showed up and made them run away, saving her, or the phantasmagorical finale where she is riding a horse through the clouds together with a tin soldier and running away from Death in form of a man also riding a horse. It's a simple, straightforward film that never drags, has a humane message and shows lot of talents, while the fact that it didn't create anything outstanding out of the short story doesn't necessarily have to be considered a flaw since it a very fluent film overall.
Grade:++
Posted by Marin Mandir at 1:44 PM