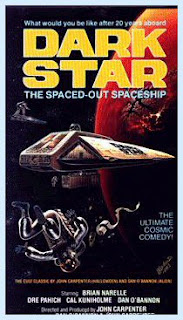 In the future, four astronauts are already for over 20 years traveling through deep corners of outer space in their spaceship Dark Star. Their mission is to plant intelligent mega-bombs on unstable planets in order to blow them up for the upcoming human colonization. But those are rare instances, because most of the time the crew is endlessly bored. They practically never see the captain, while an alien in the form of a balloon is starting to annoy them, so they plan to get rid of him. But then a short circuit activates a bomb stuck on the spaceship, so they try to talk her out of blowing up. In the end, she explodes, while the captain takes a part of a ship and "surfs" to a nearby planet.

Filmed for only 60.000 $, independent Sci-fi comedy "Dark Star", John Carpenter's first film, is a fantastic fun if the viewer can adapt to its unusual tone. Basically, it is a raw, cheaply produced comedy with that fresh enthusiasm of first time authors, an incredibly ironic commentary on classic science-fiction films, brilliantly conceived, where the idyll is only disrupted by the argument of the four protagonists. Despite the fact that it is heavily overstretched and that the balloon-alien subplot is pointless, this is an excellent comedy with cult reputation, where the coldblooded humor is thoroughly making the viewer laugh with it's original ideas. One of those ideas is the basic premise - the 4 astronauts in the future in their spaceship Dark Star are bored so much that they are even forgetting their own names, so they try to entertain themselves with anything, mirroring the ridiculousness of the banal situations. Their mission is to "eliminate" useless planets: in one hilarious sequence, that builds it's humor on the contrast between parallel slow and fast events, they throw a bomb that destroys a whole uninhabited planet (!) while they quickly disappear from that solar system with a speed of light (the idea where a weapon is able to destroy a whole planet was also later used in "Star Wars"). Among the highlights is also the whole philosophical sequence where the astronaut is trying to talk the intelligent bomb stuck on the spaceship out of blowing itself up, that's so rich with absurdness that it almost reaches Ionesco's and Hašek's dialogues. Bizarrely imaginative, hip and impossible to pin down under any category, "Dark Star" is one of Carpenter's best films.