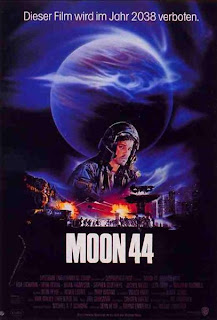 In year 2038 all of Earth's resources have been drained. In order to get new resources, multicorporations are fighting each other with force to take over planets to exploit them. Infernal affairs agent Stone gets the assignment to go to Moon 44, the only remaining satelitte of the corporation, disguised as a convict to train a defence force and investigate why shuttles with resources keep disappearing in outer space. Stone makes friends with the teenage naviagtor Tyler and finds out Major Lee is sceretly handing shuttles over to the rival company Pyrates. He leads the battle and wins, returning to Earth to criticize the greed of the corporation.

Roland Emmerich's independent low budget cult Sci-Fi "Moon 44" is a charming little film that has that glimmering enthusiasm of a young director, but at the same time it looks rather clumsy and amateurish. With a limited budget and endless imagination, Emmerich created very solid special effects - even though it's obvious the spaceships are just little toy models - and futuristic set design where absolutely every scene plays out in the background of metal control rooms or the landscapes of the strange satellite Moon 44 comprised just out of dark cannyons and fog, even adding a slightly satirical subtext in the story that's ridiculing Capitalism, obvious in the sequences where mulitcorporations are engaging in real wars to steal planets from each other and savings since they send convicts to fly the defence aircraft instead of real (and expensive) pilots. "Moon 44" is very good in the first third, combining naive imagination with some realistic moments (a drill seargent is inspecting the new recruits and yelling at the cynical hero Stone who replies to him: "I think you confused me with someone who takes you seriously"), but as the story progresses and the unusual world becomes routine it slowly looses it's initial spark and becomes a run-of-the-mill action/prisoner flick with avarage elements and clumsy execution that don't manage to stimulate the viewer into enjoying it on some deeper levels.