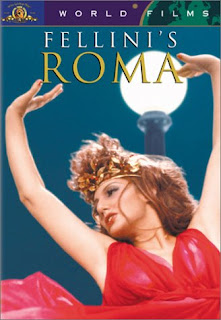 Back in his youth, Federico Fellini was a mischievous boy and a student of a professor who liked Rome and Mussolini. His parents liked plays and movies about Italy. As a young man, Fellini finally moved to Rome, listening to such monologues in restaurants like: "The way you eat is the way you shit". The movie returns to the present, 1972, observing a traffic jam while some gentleman, who is a "real Roman from morning to evening", advises Fellini to film only the good sides of the city. Priests are watching a priest costume revue, motorcycles are driving through dark streets.

W. Allen's favorite city in almost all of his movies is New York, while for Federico Fellini that's Rome. That's why it is logical that he made an official portrait of the city with his surreal semi-autobiographical drama with humorous moments that was nominated for a Golden Globe for best foreign language film. "Rome" is a bizarre synthesis of biography and imaginary grotesque - in the opening titles it states: "Rome - a ultra film", while the narrator says: "You're watching a film without a story or a plot". Truly, because the exposition at first loosely follows the childhood of the director Fellini before World War II (as a kid, he would lean his face towards the glass and make grimaces), then as a young man. But to make the matters seem even more bizarre, after half an hour the plot returns to the present (1972) while a grown up Fellini introduces his crew that is making a film, traveling with their camera through the streets where a car accident happened, while some policemen are covering up the corpses of cows. This cult omnibus as a whole doesn't shine in all it's glory because a lot of little vignettes seem senseless or boring, but Fellini at least managed to avoid his pretentiousness typical for his second surreal movie making phase, while the sequence in the theater is simply hilarious. In it, the audience is becoming more and more impatient because a striptease show was followed by a "break" with "amusing" comedians that are unfunny, so one man in the audience is making farting sounds with his hand, the other one throws a dead cat on the stage while the third one comes on the stage and lights a cigarette from the candle of singing actors, who keep on doing their act despite their confusement.

hey! i'm going to cali this weekend and won't be back until september...here is the website i was talking about where i made extra summer cash. Later! the website is here