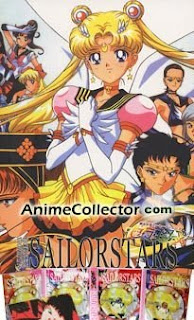 Galaxia, the most evil being that wants to conquer the whole Galaxy, awakens Nehelenia and tricks her into attacking Sailor Moon and the other senshi. After the senshi pacify her, they have to take on Galaxia's servants who attack people to steal their sailor seed. At the same time, Three Lights, a pop group consisting out of Seiya, Taiki and Yaten are transferred to Usagi's class. She starts falling for Seiya since Mamoru went to study abroad. In the end, they again save the world and Mamoru returns to Usagi.

"Save the best for last", the old saying goes. And the authors of "Sailor Moon" kept close to that motto when they made the final season "Stars" as a worthy farewell to this hyped cult anime. After the previous season rather disappointed a part of the fans, the authors returned to the old glamour and presented all the virtues again in full light, evidently also returning the bellowed outers Haruka and Michiru to the story. The "opening" 6 episodes make a retroactive jump back to finish the Nehelenia segment in a satisfying manner, yet it's by no means a way to buy time since it's crammed with brilliant visual style (in episode 167 Nehelenia's face is placed horizontally in space while a violet 'curtain' is seen in the background presenting Galaxia's voice; in 168 Hotaru is in her room observing a giant sphere that shows the whole history of the Universe; the moment where a hypnotised Usagi spots a rose earring, remembers all her passion and Mamoru and regains consciousness, while the fake dream world breaks into pieces behind her is virtuoso directed) while it also neatly sums up how Nehelenia suffers from her lost childhood despite all her luxury (power) and thus hates the senshi for having normal, fulfilled lives.

Yet the main segment is the real sensation: the pop group Three Lights - Seiya, Taiki, Yaten - is introduced into the story and proves to be a dream come true. They are such charismatic characters and even though there are only three of them, they irresistibly remind of the legendary Beatles. And their songs are also excellent: when they sing, they really sing ("Search For Your Love"). The authors also decided to improve a whole bunch of standard "Sailor Moon" flaws, since they got rid of the increasingly useless Tuxedo Mask character and inserted self-irony into the dry heroic speeches of the heroine, though it has to be said that there are still a couple of flaws here, like a few routine episodes, unconnected dramaturgy, Moon's weird wings and 'monster-of-the-day' cliche. But, the season is so filled with brilliant moments that it bombards us with them, destroying pillar after pillar of apathy, until it turns into a very satisfying experience. Through Three Lights and Galaxia, the authors tackle the themes of Xenophobia and imperialism, but also idol-fan attitude - the idea that Seiya - as a person, not as a celebrity - becomes Usagi's very own personal idol is miraculous. The relationship between the two of them is wonderfully aesthetic and exciting - she bashfully waits for Mamoru, but is attracted to Seiya who can sense that. Every second they interact is full of sparks, almost displaying "stolen flirting". When you watch it, you get the impression that all the beauty that was ever created and will be created in human history can be found in their relationship.

In episode 181, Minako unsuccessfully tries to persuade Taiki to go to the cinemas with her. Then Usagi shows up and asks her: "What was the title of the movie you wanted to see?" and Minako flat out says: "...Adult Love XX..." Whoever managed to insert that joke into the episode, is a genius. The moment where Seiya kisses Usagi on the cheek, she loses herself and starts to cry and he tells her he would take her "into a Dreamland" is one of the most magical moments of the 90s anime, while the finale with the naked Sailor Moon fighting Galaxia is bravura directed and clearly shows why this season can't be that simply rejected as a children's show. The ending and the resolution of the plot tangle involving Galaxia is remarkably well written. The first and the third season were real highlights, but "Stars" is "Sailor Moon's" magnum opus. Even when nothing is going on, so much is going on in every scene, on so many levels, that the viewers never seem to find an empty moment, even if it is just the mood. How often did I watch a movie or an anime and say that it would have been a spectacular masterpiece hadn't it made these and these mistakes, sadly concluding how it missed such a big opportunity by so little. Yet this is one of those rare examples where it really is a spectacular masterpiece – even though it swims through the esoteric, humorous romantic fantasy drama "Sailor Moon Sailor Stars" is a shining achievement.

Hey dear thanks for this beautiful post!!! It is one of the greatest animes I have ever seen. It was one of my favorite shows as a kid. The music is immense. Guys wanna watch it then go ahead and get it now. Sailor Moon Download and enjoy it at any time!!!

I'm the biggest fan of Sailon Moon series. it;s awesome. I love the soundracks btw, I found several ones on YouTube and converted YouTube video to mp3 to save them on my phone:)

This post reminds me of my childhood and makes me feel really nostalgic - I remember watching every single episode, without missing any of them and then watching it over and over, again and again, then I convert m4a to mp3 and get it on my first ever multimedia phone...

If I may ask - What are your... let's say top 15 favorite anime of all time? Just curious.

(As a footnote: I am currently watching Legend of the Galactic Heroes, but it is a huge TV show with over 100 episodes and I might give up on it if it doesn't live up to its hype. Right now, it is an interesting political anime, though)

P.S. After finishing watching seasons 4-6, I have de-listed Inuyasha from this list. I still think the first three seasons are great, but the remained was exhausting filler (if it was at least humor or romance filler, it would still work, but unfortunately, it was just battles filler).