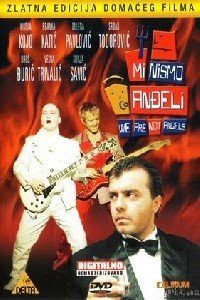 An Angel and the Devil observe how the self-centered Casanova Nikola spends a passionate night with the unsightly and introverted Marina (18). He did it only because he was drunk and the following morning he leaves the house. The Angel makes a bet with the Devil that he will succeed in bringing Nikola back to Marina and motivate him to fall in love. When Marina finds out she is pregnant, her friend Bubi finds Nikola drunk in a bar and brings him home. He begs Marina to make an abortion but she refuses. After a lengthy vacation in Lastovo, he returns to Marina on New Year's Eve and she gives birth to a daughter.

Serbian fantasy comedy "We're No Angels" is unknown in the world - except for it's identical title as the '55 Curtiz and '89 Jordan film - but if there was a crumb of justice, it would have enjoyed cult status together with other movies from that country. Deliberately relaxed, simple, with an anamorphic, profane story, the movie is unbelievably fun in it's attempt to combine romantic, fantastic, childish, bitter and sweet elements. In the beginning, a bald Angel and a drugged Devil are witnessing how a man jumps from the building. Since the Angel begged him not to jump, the Devil wins so the duo decides to try out their influence on the shaky relationship between the womanizer Nikola and the introverted Marina. The whole story is led with an elegant hand by first time director Srđan Dragojevic and is filled with shrill situations (some drunk guys push a girl into the pool. Marina doesn't want to have any contact with them, so an overweight woman tells her she doesn't know "how to have fun" and approaches them. There they also push her into the pool), ideas (director Dragojevic "explains" some strange human urges as the Devil and the Angel trying to influence their personality) and characters (a man uses his fist to create an improvised "vacuum" to "suck" his joint, gaining a high-pitch voice) that work excellently, despite a few poor ideas, while it also neatly smuggles a sweet message about true love.