My Neighbors the Yamadas 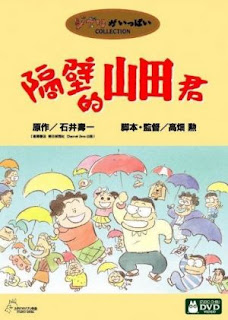 Numerous episodes from the life of family Yamada: the father is angry because his mother in law doesn't want to leave him her house...Son Noboru doesn't see a meaning in learning for school...While driving in the car, father, mother, mother in law and son realized they left the underaged daughter Nonoku in the store. But when they return, she is nowhere to be found. Luckily, she was picked up by a neighbor...The father didn't bring his umbrella at work, yet it starts to rain. He calls home and tells him family to bring him an umbrella and they obey...The mother in law persuades the father to stand up against a loud street gang...The son gets his first phone call from a girl and the whole family is spying on him...The father doesn't want his wife to switch the program...On the wedding, the father forgets his speech and thus has to improvise.

"Fake" anime (the characters are not drawn in a detailed way with big eyes, but in a naive-caricature way) "My Neighbors the Yamadas" is a simple, light, pleasant, unpretentious, entertaining and sympathetic little distraction composed from 30 episodes of everyday misadventures of the family from the title. Unlike his dramatic anime "Grave of the Fireflies", director Isao Takahata here decided to take a different approach and present fun vignettes from life everyone can identify with. "Yamada's" are the weakest in the beginning and in the end when they arbitrarily descend into fantasy, while their style is not that strong as expected, yet as a whole it's a successful product that causes the viewers to feel in good company, just like they were with their own family.