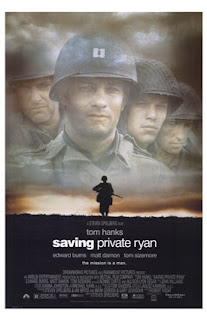 World War II. US soldiers start the Normandy invasion to break the Third Reich's military upper hand. After the successful operation, one of the officers, Captain John Miller, is given the assignment to find soldier James Ryan and bring him back home since all of his siblings died in the war. Miller assembles six soldiers in a group, among them Horvath, Reiben, Caparzo and Wade, and starts to search for Ryan across the battlefield. Slowly, the unit asks Miller is it's worth to risk the lives of all of them to save just one person. Eventually, they find him, but in a Third Reich military action, Miller dies.

Shining war movie "Saving Private Ryan" is one rare example of genius film making; Steven Spielberg displayed virtuoso direction, in such a way that the story can be enjoyed both by the wide audience (who just want action) and by the small minority of intellectual cineasts (who also want emotional depth and a clever storyline) since he created a very smooth hybrid of spectacular action and art-film, using unattractive "washed out" colors and "nervous" camera movements that made it seem almost as a big budget experimental movie. The three hour story is never boring, always inspiring, and offers spectacle, suspense, powerful mood, almost too realistic scenes of battles and war violence (the opening 30 minute sequence at the Omaha Beach, which features among others a soldier who picks up his torn arm in the battlefield, is already a classic), excellent details (a minute without sound during the wast depiction of loud shooting, Miller's hands trembling...) and actors, among them the great Tom Hanks - and yet all of them were overshadowed by one quiet, simple little film with a great story - "Truman's Show". Though that shows the rivalry and competition between a original, intimate and an epic, long movie, Spielberg and screenwriter Robert Rodat never overblow the story too excess. Despite its patriotism, the movie has a lot less pathos than expected, while the battle sequences are absolutely perfect. Today, "Ryan" is justifiably one of the classics of the 90s, a great movie in spite of all the fancy marketing and a big budget.