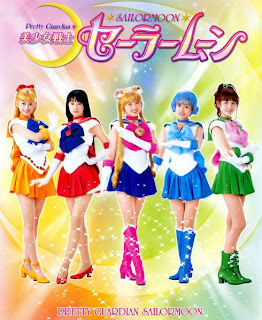 Tokyo. Teenage high school girl Usagi Tsukino leads a normal life and is crazy for the songs by the singer Minako Aino. One day, a talking puppet cat named Luna falls on her head and gives her the power to transform into Sailor Moon, a warrior who can fight against the evil forces of Queen Beryl. Usagi is quickly joined by Rei, Ami and Makoto and falls in love with Mamoru, who is in fact Tuxedo Mask. Even Minako joins them as Sailor Venus. In the end, Sailor Moon manages to save the world.

In '92, animated series "Sailor Moon" showed up and caused a sensation. In 2003, as some sort of a vague 10th anniversary, the live action series "Pretty Guardian Sailor Moon" was shot, a nostalgic-dreamy homage to the original. Although the live action is weaker than the animated (the flaws are plot holes, the lack of spectacle, the mild intensity and the range of the story) it is - surprisingly - much better than it seems. In some other director's hands it could have ended in an catastrophe, and the pilot episode didn't seem promising, but in Ryuta Tazaki's hand "PGSM" turned out to be a practically excellent show. Even though one needs to get use to bizarre costumes, TV special effects, campy touch and naive mood, the wild enthusiasm of the authors and their weird special effects are incredible: Ami's transformation into evil Sailor Mercury, for instance, is somehow fantastic: actually, it's rather got „show-off" written all over it (when she stomps her boot into the water, and then those dark purple „wings" on her dress), but it's stylish. Or the Sailor Luna (a 10 year old girl form of Luna) transformation: it's hilarious and senseless: you see her shake her butt, then Luna shows up, then there are psychedelic colors in the background, the girl makes some moves as if she is licking her hands as a cat and - presto, she is a sailor senshi too. Rarely will you ever see more kitsch than you get to in that transformation scene, but the authors still did it without a blink of the eye, and you have to give them credit for such courage. Miyu Sawai is absolutely fantastic as Usagi. It's almost impossible not to like her. She is wonderful in many of the comical situations (when she has a huge fight with her mom a frightened Shingo is hiding under the table and eating his breakfast) and later proves to be equally effective in drama (her mourning all day long in bed after finding out Mamoru is already engaged). The weird part of the story had Minako being a famous rock star, but even that worked. "PGSM" is a sight to behold. In their mix between camp and art, the authors bravely turned the impossible things of the anime into reality (the costumes, demons, flashing rays) and got away with it. I counted all the grades of all the Act's and the show's average grade is 8.3/10, believe it or not. One cannot explain how they did it, but they did.