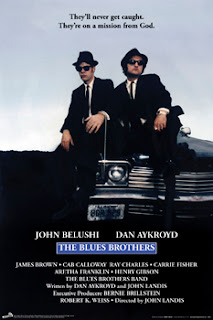 Jake and Elwood Blues are two brothers who always wear dark suits and sunglasses. When Jake gets released from jail and reunited with Elwood, they get the assignment to save their old Catholic orphanage that will be shut down unless it pays 5.000 $ of taxes. Their band has fallen apart, but they manage to reunite it and get a plan to play at a concert in order to raise enough money. Along their way, they are persecuted by Jake's former girlfriend, a bunch of neo-Nazis, some other bend and a whole bunch of police officers. Still, they conduct the concert, pay the taxes, but get arrested and land in prison.


John Landis surprisingly crafted an incredibly oddball and fresh comedy filled with occasional musical sequences and stars in almost every single little role (even Steven Spielberg has a small cameo role as the main tax collector towards the end) that helped "The Blues Brothers" to become a smash hit and gain cult status. The whole film is meticulously crafted, the characters of the Blues brothers—who always wear sunglasses, dark suites and act cool—are irresistibly charming (and influential for thousands of films that copied their persona) and their "mission from God" where it seems that they are unstoppable is conceptualized with childishly simple means. Dan Aykroyd and John Belushi delivered the roles of their careers, not only in physical comedy, but also in dialogue ("How often does the train go by?"-"So often you won't even notice it.") while the dynamic charge, analytical view, fantastic fun and masterful comedy directing ensure that this is undoubtedly Landis' best film, a comic masterpiece.

The aversion of some critics is truly baseless since the story has an endless supply of great scenes, starting already from the insane sequence where the Blues brothers drive their car into a mall centre, crashing mannequins and all, demolishing it in a sheer fantastic fun, while a police car is chasing them, and sometimes the unusual perspectives are very intelligent, such as the explosion that causes a hotel to collapse while the camera views inside and depicts the two main heroes falling through the collapsing floor. The final car chase sequence in Chicago, where the Blues brothers are driving away from hundreds of police cars avoiding the poles of the elevated trailways, street holes and cleaning the mirror of their own vehicle, is truly unbelievable and virtuoso executed and still remains the golden standard for those kind of films, evoking spectacular comedy stunts not seen since B. Keaton's movies. "The Blues Brothers" are a shining film, a one where the viewers cheer for the characters and enjoy the ride, a comedy that's the way it should be and that puts many today's comedies to shame—it starts off contagiously fun, and with time just grows exponentially.