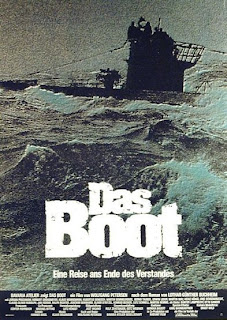 World War II, Germany. Young war correspondent Lt. Werner joins the crew of the submarine U-96, led by captain known as the 'Old man'. After a party in a club, they get their assignment to sink British battleships and proceed to sail to the sea. Weeks and weeks pass by and crew members get bored, when suddenly their submarine narrowly avoids getting slammed by a British destroyer. They get stuck in a storm and then encounter a British convoy and proceed to attack them with torpedoes, and are shocked to spot a burning tanker with soldiers crying for help in the water. They stop in Vigo on the Spanish territory and get new orders to go the Mediterranean. When they try to pass by the British in Gibraltar at night, they are attacked and their damaged submarine sinks uncontrollably 280 meters into the sea, almost double more than it can stand, but they manage to repair the engine and resurface again. Back at their home base, they are greeted with cheers, but then allied aerial attacks bomb them.

Hailed German war film "The Boat" set new standards for the submarine genre movies with its gripping and realistic story that showed that it can work even though it plays out in the closed submarine 90 % of the time: the story is filled with powerful, wild and raw scenes, from the speech of the captain in the Cabaret club where he mocks that "cigarette-smoking asshole Churchill", through the first alarm in the submarine where every crew member quickly runs towards their battle station, even some guy who rushes out the toilet with his pants pulled down, up to the intense situation where their damaged submarine slowly but surely uncontrollably sinks deeper and deeper down the sea, getting slowly crushed by the water pressure. The most interesting fact is that almost no battle scene is shown outside in the sea, but only heard from the interiors of the submarine, while depressing and bleak style shows the senselessness of the war and the end of Nazi mythology. Also, the soundtrack of the film is legendary: almost everyone heard its tune during some occasion and didn't realize its origins lie here. Most of the credit has to be given to the director Wolfgang Petersen who created an eerie claustrophobic and hydrophobic atmosphere thanks to the dynamic Steadicam movements around narrow cabins and rooms, giving the film great popularity resulting in 6 Oscar nominations (including best director and screenplay) and one BAFTA and Golden Globe nomination (both for best foreign language film), even though the novel author Lothar-Günter Buchheim criticized the film for "overdone, over-cliched adaptation and radical shortening" of his original story. Even though the film is very good, some of his criticism is truly right on and not baseless, since the intrigue factor slowly starts dropping in the second half and some elements become tiresome and standard, which could have easily been avoided, creating a better film than it is now.

Very interesting review. The ending really is shocking and heartbreaking. All that suffering for nothing.