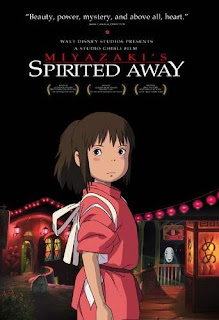 Chihiro, a little girl, is sitting in a car driven by her parents. They are moving to another town but suddenly turn towards a forest and arrive at a tunnel. From there on they continue by foot and enter a empty town where mom and dad turn into pigs because they ate the food of the gods, while Chihiro gets saved by a boy called Haku who advises her to find a job at Yubaba, the ruler of that strange world. He explains her she got lost in a spa for 8 million gods and that her new name is now Sen. Chihiro is scrubbing bathtubs and accidentally releases the ghost No-face who constantly eats, and saves Haku who was turned into a dragon because he stole. Chihiro also returns the baby back to Yubaba, kidnapped by her twin sister, and guesses Haku's real name. She returns to her parents and asks herself if it was all a dream.

After the violent "Princes Mononoke" Hayao Miyazaki chose a much gentler story for his fairytale "Spirited Away" that won an Oscar for best animated feature in '03, the first time an anime ever won that award, after eons of Academy's unexplainable ignoring of that endemic subgenre of animation. But calling this a film for kids, even though a heroine is a kid herself, is rather a false conclusion since there are a few very solid shocks present here, like the rather scary scene where the parents get transformed into pigs because they ate the food of the gods or the black ghost No-Face who eats the attendance. "Spirited Away" contains optimism and childish cheerfulness enrolled in a felliniesque fantasy, but for the first time demonstrated Miyazaki's trouble with screenwriting: three large heads, a dragon, a giant baby and numerous other fantasy creatures just seem to be a camouflage for the fact that there is no clear link that can connect all these condratictory elements in a harmonious and purposeful whole. The film is highly episodic, and several segments could have easily been cut since there is no clear beginning and a conclusion to them or for the heroine. How do these creatures relate to Chihiro? What did she gain from this world? All these questions seem to stem from Miyazaki's incomplete script, which will be sensed even in his later films after "Spirited Away". The humor is present at many moments, though: Chihiro extremely slowly descends down the stairs, but suddenly one of it cracks and she - in contrast - spontaneously, incredibly fast runs down the rest of the stairs until she slams into the wall. This salvage of "Alice in Wonderland" is a strange surrogate, but it has sporadic poetry and emotions, like in the scene where Chihiro is falling from the sky while her tears are "flying up".