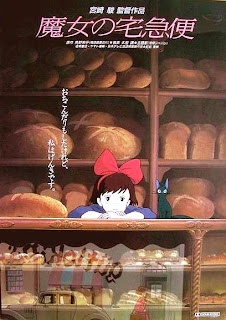 Kiki is a witch and, according to an old tradition, has to leave her home and parents at her 13th birthday and display independence by staying in an unknown city for a whole year. Kiki and her talking cat Jiji fly away on a broom one night, land in a city at the coast and find a place to stay in a bakery of a nice woman and open their own delivery service. But one day Kiki suddenly looses her ability of flying on a broom and can't talk with Jiji anymore, becoming depressed and lonely. After rehabilitation, she gains her powers back and saves the boy Tomba from a Zeppelin.

Anime "Kiki's Delivery Service" has neither suspense, nor bad guys, nor loud gimmicks that sustain the viewer's attention, nor a tight story, but an inspired author doesn't even need those things to make a beautiful film. Hayao Miyazaki succeeded in that with ease, thus his shining "Kiki's Service" is one of his best achievements in his great phase from the '80s where he created one classic after another. This film embraced Miyazaki's caprice trademark of flying the most which resulted in wonderful scenes (when Kiki flies on her broom the first time she "crashes" into a tree; later on, in big, proud style, she proceeds to land slowly in the middle of a crowd in the street). The film is filled with quiet, understated beauty and charming characters since even the talking cat Jiji seems irresistibly cute (it's obvious this archetype influenced such shows like "Sailor Moon" and "Sabrina the Teenage Witch"), but the most interesting thing is to analyse all the meanings of the symbolic story of a 13-year old alone in a big city - it's actually an essay about the search of a person for his or her place in the world and identity, but also about growing up and changing. It's especially intriguing, emotional and touching when Kiki looses her ability to fly on the broom and talk with her cat, becoming depressed and lonely: maybe the talking cat was just her imagination that disappeared when she became a realistic grown up that socialised and found new, human friends that replaced the imaginary ones. "Kiki's Delivery Service" is such a gentle film that one could easily be driven in temptation to simply dismiss it, but after actually watching it one realizes it's a emotionally devastating story about transience.

This was the first Studio Ghibli film I ever saw and ironically the one I've never rewatched! (Don't know why. I loved it.) My cousin insists that "Watching paint dry" is more entertaining than Kiki and that I should never watch again to "Preserve my memories of it."

What can I say? I simply love it. It is as simplistic as can be, it is almost a kid's film, but when you think about, a great film doesn't always have to be something opposite of those two. It is a remarkable anime for all ages.