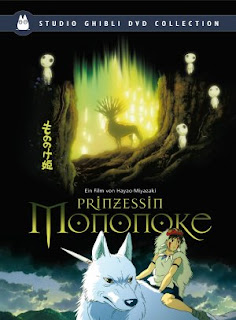 In Medieval Japan Ashitaka is a prince of a tribe that's dying out. His problems start when a wild, phantom boar filled with leeches attacks his village and he kills it in self defence, but gets infected with it's sickness on his right arm. In order to find a cure, Ashitaka heads for west on a chamois to the iron town ruled by lady Eboshi, a feminist cutting off the forest to dig for metal. But these actions by the villagers attract anger by the forest god and San, princess Mononoke, who lives with wolves. Ashitaka makes friends with San but Eboshi cuts off the head of forest god with a gun and triggers an apocalypse. But San and Ashitaka return the head to the forest god's body which calms down and regenerates the forest.

After four anime films for kids, Hayao Miyazaki returned with a film for adults - and what a film for adults it is. "Princess Mononoke" is quite frankly the darkest, most brutal film the famous director ever made; already some 15 minutes into the film, when an arrow cuts off the head of a Samurai, does one realize the story displays violence with a shock never quite seen or expected from Miyazaki. "Mononoke" is a serious and suspenseful movie about human negligence of the environment, yet although it was hailed by critics and gathered a record number of 10 million audiences in the theaters of Japan, surpassing even "Titanic" at the box office, it is still a slightly disappointing and highly uneven feature: often excessive, as if the master lost his patience and ditched subtlety on several occasions, but has some of the greatest moments in any Miyazaki film, like the refreshingly gentle scene where Mononoke chews food and gives it to Ashitaka through a kiss, who is too weak to eat. Anxiety and darkness crowd the story, and it is a pity that it takes strange and dubious directions: nothing against overly depressing or overly optimistic films, but each of them has to have a clear reason, while here it has too many overkill and bizarre touches (weird creatures like wolves with three tails or leaches). Also, Miyazaki turned truly too serious for comfort and presented his obvious messages in a pretentious manner.

"Mononoke" is a good film, but it is too dry and Miyazaki sharply displays the plot, but even resorts to splatter violence and horrifying creatures, whereas it is a mistake the princess with the magical title isn't the main, but actually a supporting character - the main one is obviously Ashitaka. The story refuses to one-dimensionally separate characters into good or bad - although many Disney's animated films are great, they carry a hidden, wrong message for kids, namely that every character is either good or bad, and that the only way to get rid of the bad is to kill them off, but in real life that's not the case. "Mononoke" is heavy handed, but credit has to given to the fact that it shows that bad people have to actually be changed to become good, and that they think they have good intentions. Is Lady Eboshi good? Yes, she helps the lepers, the prostitutes and other outsiders by giving them refuge in her town. Is she evil? Yes, she is egoistically destroying the forest. Also, the finale has to be seen: it has everything, and Miyazaki courageously blends in art and horror elements without any compromise. The last 20 minutes also contain one of the strongest 'dirty poetic' moments in 90s cinema, one so strong and so bizarre that some people turned their heads away and could not stand its intensity because they misinterpreted it for disgusting - it is the darkly romantic sequence where a giant white pig got infected by the red leeches of hate and became evil, while San fell into them and lost her consciousness. The minute Ashitaka jumps into the sea of red leeches, diving in and searching for San to save her, is something that has to be seen.