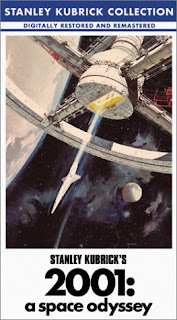 Prehistoric Africa: Man-apes live boring, ordinary lives, nothing different than other animals. But one morning they find a mysterious black monolith in front of their cave, left by an alien civilization. Fascinated by its perfection, they get inspired to use bones as tools and weapons, become intelligent and gain dominance over other man-apes tribes. 2001: Astronauts have discovered another monolith on the moon and realized it is sending signals towards Jupiter. A space ship, Discovery One, is sent to that planet to find the last monolith. During the journey, computer HAL 9000, a perfect tool, starts showing signals of malfunction and kills every astronaut, except Dave, who manages to disable it. Having reached the final monolith, Dave has been transported to a room beyond time and space. There the monolith turns him into a "Star child", a superior being, completing the evolution of humanity.

There are some unwritten rules about what a good film should contain. It should have a deep character development. Have a dynamic and logical story. Have elements of humor and emotions to keep the viewers attention. Not be too long. "2001: A Space Odyssey" does not follow any of those rules—among others, the main protagonist, played by Keir Dullea, does not show up until almost an hour into the film—and it still became a brilliant film, a masterpiece of symbolical films — it is stripped of any kind of action, plot, emotions, suspense or gimmicks that remain the viewers' attention, and all it has is style. In a lot of the long scenes the viewer will think; "This should be boring, this should be uninteresting", but it is not, it is entirely fascinating. In many ways, "2001" is actually an experimental film and a silent film in one — the first dialogue appears some 25 minutes into the film, and throughout the film words are reduced to the minimum — in which the themes and messages can only be detected subconsciously, not consciously. For instance, the legendary sequence in which the ape-man uses a bone as a tool and "discovers" intelligence, accompanied by the musical poem "Also sprach Zarathustra", is a perfect poetry about crossing limitations.

Curiously, by fast forwarding into the future, the film debates how tools have become more powerful, important and "alive" than people themselves, obvious in the spaceship where computer HAL, the perfect tool, controls everything, and man almost nothing. But once when HAL and man get into a direct confrontation, the man wins — maybe because of his suppressed, but still unique spirit? The film has no main character because the whole mankind is the main protagonist, from its beginning to its possible ending, while the black monolith serves as a symbol for some perfection, some ideal that causes mankind to change and progress further and further. This Sci-Fi classic is directed with bravura, from the meticulous tracking shot of Gary Lockwood's character jogging across the 360 degree space station up to the 10 minute long sequence near the end, in which the astronaut is traveling through various galaxies and dimensions until the end of the Universe, which is truly indescribable, as well as the almost touching moment in which the monolith transforms the old hero into the next step of human existence, a "Star child" — his soul? Or his intelligence comprised out of pure energy? In that case, the whole theme is the history of the creation of intelligence — and its abandoning of a physical body. It sounds strange for the cold Stanley Kubrick, but that epilogue looks as if it is containing a religious subtext and that it believes in the triumph of the human spirit. "2001" is a great film precisely because of the fact that it is telling that the final role and ending of future life in the Universe may amount to something more than just in that what can be sensed right now.