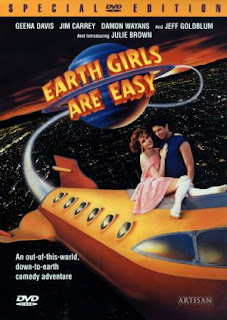 A week before her wedding with doctor Ted, manicurist Valerie discovers his mistress and leaves him. One day, a small spaceship lands in her pool while she was swimming in a bikini, and three furry aliens exit from it: the blue Mac, the red Wiploc and the yellow Zebo. After her friend Candy shaves the colorful fur of the aliens, Valerie discovers they look exactly like humans. That way she can introduce them as people without problems and lead them to discos and parties. But after Ted frames Wiploc and Zebo for a robbery, the aliens decide to leave Earth, and Valerie decides to go along with them.

Totally shrill comedy that copes well with colors and amusing situations, but much less with rather tiresome dance acts, did not achieve a greater success and was a long time unknown after the divorce of Geena Davis and Jeff Goldblum, yet its cult status grew steadily. It is coincidentally also one of the earlier films starring the then unknown Jim Carrey, whose later fame also retroactively grew attention to this small flick. "Earth Girls Are Easy" is a relaxed, daft and light comedy whose level increases after the three red, blue and yellow aliens lose their fur and "become" humans Goldblum, Carrey and Wayans, yet all the wacky touches throughout and a clumsy ending, as well as the predictable tangle where Valerie falls in love with one of the "aliens", resulted in mixed reviews. In the end, the best performance was delivered by the always adorable Geena Davis who is simply irresistibly sweet as the baffled heroine who finds love in the strangest ways.