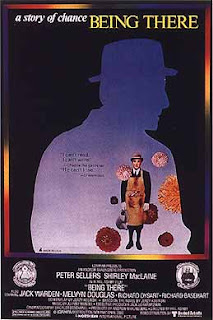 Recently I've been watching an episode from the animated TV show "Daria", "Speedtraped": there was one scene in that episode where Jane was in prison, doing a tattoo to a female criminal with a pen. At one point they started debating about art; Jane stated; "I'm simply posing the question, what if an eggbeater is considered great art on Mars; would that make it art to us?" Truly, what makes art meaningful? What makes a day meaningful? What makes a life meaningful? What is actually the definition of meaning? And what if something, not just art but everything in life, is considered meaningful by one person and meaningless by another? That got me once again thinking about one of my favorite films, Hal Ashby's "Being There". The film, which is almost an anti-drama, revolves around one of the strangest heroes of any story - Chance, a middle aged gardener. In a way, Chance is anti-human, actually beyond human; he doesn't have a wife, kids, job, family, money, friends, he never left his estate and thus has virtually no contact with the outer world...and he doesn't care. He is happy non the less. In lot of movies, a hero starts with being unhappy and after a lot of adventures finds his happiness. But in this movie the hero is in perfect satisfaction from the start until the finish. It's as if he is an "accidental" Buddhist. Praise has to be given to the shining, multi-layered screenplay by Jerzy Kosinski based on his own book that handles the theme of perfection and shows that the only way it works is that people all have their own personal projection of a suggestive appearance (Chance).

Chance lives and works inside one garden in Washington. He was born there and he never left the estate. It is implied that he is mentally handicapped. He likes watching Television and is surrounded by only two people; Louise, an old maid, and a nameless old man. Chance wouldn't mind if he spent the rest of his life like that, but one day the old man dies and the estate has to be closed and evacuated. After two lawyers convince him to leave, Chance complies - for the first time in his life he sets a foot in the outside world. He wonders the streets aimlessly until he proves one old paradox; "You just have to be at the right place at the right time" - he is namely slightly hit by a limousine of a wealthy woman, Eve Rand. As an apology, she brings him to her home, a gigantic mansion equipped with doctors who examine his injury. There he also meets Benjamin, Eve's dying husband who is still an influential lobbyist. Benjamin doesn't realize Chance is retarded - he is fooled by his elegant clothes and gentle words, interpreting his every childish sentence as a metaphor. Soon the president spots that Benjamin, his close friend, has a high opinion about Chance. So he joins him. Soon, Chance is a media star and every celebrity or politician interprets his strange behaviour as a "genius". Eve falls in love with him. And after Benjamin dies the major politicians discuss about putting Chance as the president.

"Being There" is a masterpiece because it dares to question the criteria for every value, not only in film and art, but in life in general. Because every value, every emotion is subjective and is created in our own mind. There's no reality, just perception. The characters in the film are smart, wealthy and powerful, but don't know how to be happy, while Chance is not smart, but knows how to be happy without anything because he is free of desire and acts like Nietzsche's "Free spirit", being, in a strange way, superior to them and simply independent. But although the film's messages are serious, the movie itself presents them in a light, albeit funny way, and Peter Sellers, after leaving the low humor of many of his comedies, is unbelievable as the main protagonist and probably gave the role of his career, a one that's so charming that could convert even his biggest hater.

In one of the funniest subtle scenes, Chance is in a talk show responding to the state of the economy by telling how "after the winter, there is spring. Some plants grow better in the light while others in the dark". It's hard to analyze this film without mentioning its end; In the last scene Chance is walking around the Rand's estate, observing the nature. He stops when he reaches the edge of a lake. And then the stagerring ending sets in. In the background you can hear the words; "Life is a state of mind". Obviously, the ending can be interpreted in a lot of ways too. Some would say the whole film is a giant satire about religion, some that it's a sad fact that people only see what they want to see and never realize the truth, some that it's about misunderstanding, some that Chance has gotten so powerful that he can't make a "false step" no matter what he does. All of them could be true, but they all show how Chance is 'detached' from our world. The last words in the film are "Life is a state of mind". So, Chance became an illusion, but what if other idols are also an illusion? What if a dream job is only an illusion? Money, love, family... What if everything people think is important in life is also only an illusion? Can we really know what is truly great to us, not what our instincts impose on us what should be great? It is disturbing, this human need to find and invent idols even when there are none. Everything in life is only as important as people's mind percieved it to be - maybe the movie is saying that we should not be shaped by the world, but that we should change and rearrange the world by our own rules.