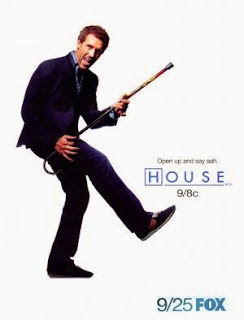 Since he is taking Vicodin, Dr. Gregory House realizes that it caused hallucinations in his mind and thus admits himself to a mental institution. He recovers and returns back to the Plainsboro hospital to treat patients with "impossible" diseases, and assembles his team: it includes Dr. Foreman, Dr. Chase, Dr. Taub and Dr. Hadley, nicknamed "13". House starts a romantic relationship with the Dean of the hospital, Lisa Cuddy. However, due to his peculiar behavior, they break up and he drives his car into her house. He goes to jail, but returns again to the hospital, where Foreman is now the new Dean. House is shocked when his only friend, Dr. Wilson, will soon die from cancer. House thus fakes his own death and decides to spend Wilson's last five months of life with him.

At the start of the 21st century, it seems that the quality of the films has started to slip away and transition to TV. Among the highly acclaimed TV series of that era, which set up new standards, was medical drama series "House, MD". Unlike "Scrubs", which was too silly at times, or "ER", which was way too serious and straight forward, "House" gave an almost perfect balancing act between drama and comedy. At the core of the show is a twist to the detective genre: House and Wilson are basically modern versions of Sherlock Holmes and Dr. Watson, except that they do not solve crime mysteries, but medical mysteries, which gives the worn out concept freshness. In theory, this concept should not work - the viewers, ordinary laymen, for instance, do not know the difference between cerebellar ataxia or Refsum disease - and yet, there is suspense until the end while the team tries to guess what disease a patient is suffering from. Some of the virtuoso dialogues are amazing, and the writers seemed to have been very inspired while writing them - when Wilson tells his friend, who thought he was cured, that his leukemia suddenly returned, they have this exchange: "They call it regressive leukaemia." - "Maybe they should call it 'ironic leukamia', instead." Taub complains to House: "Your relationship with Cuddy is beginning to cause problems, with all due respect..." - "None taken". Upon hearing that House is insisting that he can still see a prostitute who will only massauge him, even though he is in a relationship, due to "integrity", Wilson comments with: "You are the Rosa Parks of prostitutes-masseuses". When a patient is volontarily going to get crucified each year because he wants to thanks God since his child was cured from a tumor, House says: "Pontius Pilate, the misunderstood oncologist". There are also many other howlingly funny, cynical comments from House regarding a vibrator ("Do you use your vibrator?" - "My what?" - "Sorry. Your 'battery-powered-Brad-Pitt'.") and heroin ("And he also enjoys vitamin H. He's a drug addict").

However, the main star is definitely House himself. Due to his arrogant, sardonic and mean behavior, full of insults, numerous viewers refused to even watch the show. At first glance, he is a jerk. However, after a deeper view, House is one of the most complex characters ever created. On one hand, he is indeed cynical, but on the other, he has an incredible gift for figuring out diseases and saving people's lives. There is a brilliant little detail in episode "Unwritten" that perfectly illustrates his persona: a woman, a writer, refuses to undergo surgery because she blames herself for letting her son drive during bad weather, who died in a car crash. House just shows up at her bed and shows an X-ray photo of a brain, pointing at the centre. "Do you see this? Your son actually died from a brain aneurysm, not from a car crash. He was dead long before it." This convinces the woman that she is not guilty of her son's death, and she thus accepts to go to surgery. It goes well and she is cured. Later, someone asks House: "Did her son really die from a brain aneurysm?", and he flat out says he lied and made that all up. He tricked her, yes, but he only did his job: to save lives. Likewise, there is a precious, romantic little moment in episode 132, where Cuddy kisses House's ill leg, in one of the most beautiful moments of the show, almost as if she heals his soul with it. House's problematic behavior may be tracked down to his ill leg and loneliness, but it's not that easy: he is downright antisocial, destructive and psychotic at times. There is clearly something wrong with him, almost as if he deliberately refuses chances to be happy. One theory is, maybe, that he has a suppressed gay side, and in a deeper relationship with Wilson than at first glance. The main actor, the genius Hugh Laurie, plays him like a king, and gave the role of a lifetime. The show has flaws, though. Some of the details of bloody diseases tend to bee too explicit at times. A bizarre turn of events in episodes 147 and 155 is highly questionable. Seasons 7 and 8 have some too melodramatic episodes. And the final two episodes, while original, give a rather anticlimatic, inconclusive end. Nonetheless, this advanced into an excellent TV show, which gave us a sate deal of drama, inventiveness and energy that we only got in crumbs in that time.