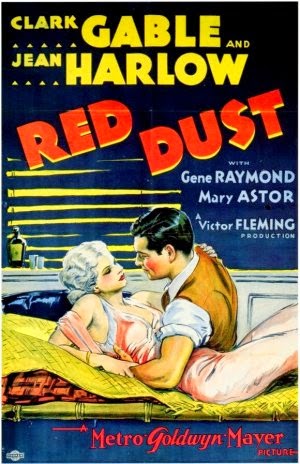 Dennis runs a desolate rubber plantation in the jungles of the Indochina, and is fed up with his status. One day, Vantine, a prostitute who escaped from Saigon, arrives to the plantation. She and Dennis argue, but get intimate that night. However, the next morning, Dennis tells her he is looking for a better woman, Barbara, the wife of engineer Gary who just recently moved here. Dennis seduces Barbara, but when he hears how Gary loves her, he decides to abandon his plan to save their marriage. In a bitter argument, Barbara shoots and wounds Dennis before leaving with Gary. Dennis thus stays with Vantine and accepts his low life.

One of director Victor Fleming's earlier feature films, "Red Dust" is a rather 'rough' and wild essay on love triangles and human relationships for the golden era of Hollywood, yet still cozy and innocent enough to be suitable for universal audience since it avoids shock in favor of the subtle. The living conditions in the jungle plantation are remarkably realistic, gritty and dirty (the sand storm; the tropical heat) whereas the author seems to avoid the glamorous style even to the end, when it shows its heroes accepting their status of the "lower class" and abandoning achieving something more in life. Still, it avoids any deeper issues of colonialism since the natives are just there to be extras for the main heroes. Clark Gable is impressive as the grumpy Dennis, yet he clearly shows far more chemistry with the brilliant Jean Harlow as prostitute (!) Vantine than with his love interest, the classy, but bland and uninteresting Barbara, played by Mary Astor. Unfortunately, the film presses for more Dennis-Barbara moments than it can carry, especially since Dennis-Vantine scenes overshadow them with ease. Harlow's Vantine, despite a supporting role, provides indeed for best lines throughout the film ("You got some nerve!" - "In my life, I have to have nerve!"; when Barbara shows up for breakfast, struck by tropic heat, Vantine says: "Hurry up and drink you pineapple juice before it boils"; after Barbara kissed Dennis, Vantine gives her notice that she knows: "Don't tell me he needed to borrow your lipstick!"). The storyline was not especially engaging or strong, yet it still has that good old school charm of classic cinema that many modern films lack. Gable would 21 years later star in the remake "Mogambo" basically repeating his role here.