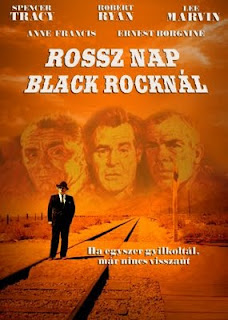 Black Rock, a small Californian town after World War II. For the first time in four years, a passenger train stops at the local station and drops off a stranger, the one-armed J.J. Macreedy, a war veteran. The people are all acting suspicious while the nice stranger takes a hotel room and inquires about the fate of a certain Japanese American, Komoko. Macreedy discovers that Komoko was killed by the local bully Smith. However, Macreedy confirms that Komoko was a loyal American since his son sacrificed his life for him in the war. In a showdown at night, Macreedy beats Smith and leaves the town.

One of those good 'old school' movies that talk about some controversial topics in an intelligent, calm, measured and natural way to such an extent that even children could watch them and understand its universal messages without feeling traumatized, "Bad Day at Black Rock" is arguably the best achievement by director John Sturges. Spencer Tracy, who won the Cannes award and was nominated for an Oscar as best actor, is absolutely phenomenal as the kind, simple one-handed stranger who visits the title town and causes a commotion among the locals, easily establishing an engaging and accessible mystery story that grips the viewers right from the start - once you watch the first minute, you just get the urge to see it to the end. Tracy's character Macreedy is wonderfully humorously determined to find his goal - when he enters a hotel, he exchanges this dialogue with a suspicious local: "Can I help you?" - "Are you the owner of this hotel?" - "No." - "Then we don't have anything to talk about"; whereas when the hotel manager tells him that all vacant rooms are "reserved", he just takes one key himself and goes to one empty room anyway. Another humorous moment shows up when Macreedy goes to the local prison and spots the Sheriff sleeping on a bed in the jail - the one-armed hero wants to close the jail door but then the Sheriff wakes up and steps outside, exchanging this line with him: "I just wanted to close the door! I thought you were the guest!" - "Guest? I'm the host!" Cleverly contemplating about the strained treatment of Japanese Americans in the US during World War II, this is an elevated, shining classic where only the last 20 minute lose that tight grip.