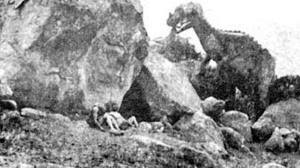 During one dinner party, one gentleman spots a lady and falls asleep while reading a book, imagining how cavemen had it "easier" because the only thing they had to rely on to find a wife was brute force. In his dream, he is a weak inventor in a tribe with a lot of women. When their cave is attacked by a woman-less tribe, the inventor beats them thanks to a club. The enemy tribe creates a club themselves, but the inventor invents an arrow and wins, becoming the new leader of the cave.


One of D. W. Griffith's lesser films, his short silent caveman version of "The Abduction of the Sabine Women" is just an exercise for his future films, yet it remained a peculiarity as a rump forerunner to cult fantasy-trash "When Dinosaurs Ruled the Earth". Basically just a 24 minute extravaganza where two caveman tribes fight with clubs, simplistic "Brute Force" has little to nothing to show, neither stylistically nor thematically, except for the sole unusual setting. However, it went down in history as the first film that tried to depict dinosaurs on film, unfortunately with little success: if the snake and the crocodile with silly wings placed on its back are excluded, the only dinosaur shown is a Tyrannosaurus Rex in front of a cave, but since it is just a stiff, 10 feet tall puppet that barely moves its jaws, this 10 second scene does not match the kinetic stop-motion special effects of its successor that stimulated the imagination of the viewers more, the uneven but interesting artifact "The Lost Word" filmed 11 years later.