When Dinosaurs Ruled the Earth 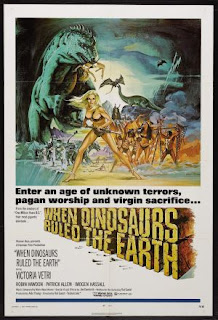 Prehistoric Earth. A tribe of cavemen decide to sacrifice the blond Sanna to the Sun. A natural disaster interrupts the sacrifice, so Sanna survives, but she is blamed for it and has to run away from the valley. She finds refuge in a dinosaur nest where one dinosaur mother mistakes her for her cub and protects her. She meets fishermen Tara and falls in love with him, but the tribe members find them and want to sacrifice them, yet she is saved by her dinosaur "stepmother". In the end, a giant tsunami hits the shore and wipes out the valley, while Tara and Sanna are saved on a raft.

The Hammer studios fantasy adventure "When Dinosaurs Ruled the Earth" is nothing more than a solid piece of cult trash that used the attributes of playmate Victoria Vetri to cash in on the success of the similar hit that used Raquel Welch's attributes, namely "One Million Years B.C.". Director Val Guest crafts the film in a rather straight forward way, eliminating the dialogue of cavemen - except for incomprehensible, random gibberish used as their "language" - and presenting the story as a primeval, elementary adventure that has some potentials, yet the tiresome events where some cavemen run away from the other to escape the pagan sacrifices just seem as fillers between the real highlights, the scenes with dinosaurs using stop-motion effects that were even nominated for an Oscar. Except for two exceptions where the filmmakers used silly scenes of real lizards, the dinosaur effects are truly fascinating and realistic - especially the dinosaur 'stepmother' of heroine Sanna that protects her and mistakes her for her cub - even though their design is rather crude since they look like amphibians. It's a sufficient 'guilty pleasure', but the movie that really showed the chemistry of both the dinosaurs and humans interacting between each other, "Jurassic Park", remains an untouched ideal.