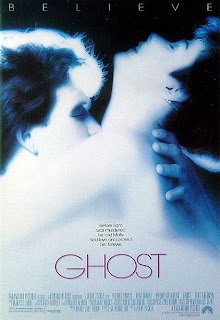 New York. Love couple Sam and Molly buy a new apartment and are happily in love. One day, Sam discovers there is too much money on the account of one of his business clients, so his colleague Carl hires criminal Willie to kill Sam, fearing he might discover money laundering. Sam's ghost separates from his killed body, but cannot talk with people. Discovering Carl is behind everything and that Molly is in danger, Sam's ghost contacts medium Oda Mae and retrieves the stolen money. When Carl attacks Molly, Sam intervenes and the bad guy is accidentally killed, while Sam leaves Earth.

The first serious and sole directorial achievement by Jerry Zucker, who before exclusively directed comedies, "Ghost" is a commercial, hyped and rather successful mainstream junction between fantasy and gentle romance. The film has a few sparkling details and emotions (the pottery sequence where Sam and Molly sensually kiss while "Unchained Melody" plays in the background is still one of the most beautiful romantic moments of the 90s), but its awe still doesn't affect or seem as authentic and as strong as it could have. Some of the soap opera elements and heavy use of melodrama show such awards like a nomination for best picture at the Oscars and Golden Globes was more a result that "Ghost" was "in" at that time than that it would become a real classic, and especially questionable was the fact that the Oscars, the Globes and the BAFTA awards awarded Whoopi Goldberg for best supporting actress - she is really good as the medium Oda Mae who brings humor in the serious story, like in the scene where Sam's ghost talks to her non-stop for days until he finally persuades her to contact Molly, but a few amusing and sweet moments don't compensate for the fact that there were at least 30 better actresses overlooked in that category. Even though the finale falls into cliches (quite frankly, if Sam eliminated Willie, why didn't he do the same with Carl? And why is he so afraid for Molly when he knows there is an afterlife anyway?), "Ghost" is quite a touching and neat film.