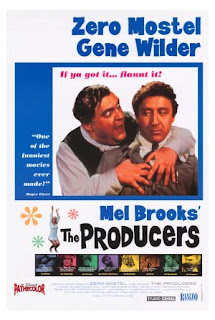 Broadway producer Max is bankrupt, while he earns money by seducing old ladies in his office. But one day accountant Leo visits him and accidentally calculates that producers could steal a million $ of credit if they set up a play that nobody will watch, so Max brings him to a park and persuades him to do that. In order to do so, they choose the worst screenplay possible, the catastrophic story "Springtime For Hitler" by some Nazi author, and they even bother to hire the worst director, a transvestite, and gay rocker for the leading role. But Max's and Leo's plan backfires when the play becomes a huge hit and they end up in jail.

Both simple and funny satire, unusual "Producers" were the directorial debut by Mel Brooks, even though they at first earned weak grades by the critics and were a commercial failure, so the director later on dedicated himself to wackier and poorer comedies. But "The Producers" are a very good film despite a few bad or tasteless jokes, a one that's even sustained and quite disciplined - everything is based on a hilarious concept where the producers deliberately craft the worst possible play in order to earn a huge profit, equipped with insane dialogues ("How could this happen? I was so careful. I picked the wrong play, the wrong director, the wrong cast. Where did I go right?"), static exteriors in New York and amusing humor - while only the occasional crude humor and cold characters bring it down. The best scene is the one where Leo gets a genius idea and a water fountain erupts behind him. Brooks won an Oscar for best screenplay, while Gene Wilder was nominated as best supporting actor.