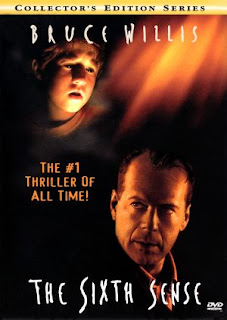 Child psychologist Dr. Malcolm Crowe is celebrating his award with his wife Anna. Suddenly they notice someone broke into their kitchen: it's Vincent, once a boy Malcolm treated, but now grew up into a disturbed adult. Vincent shoots at Malcolm and commits suicide. A year later: Malcolm meets a little boy, Cole, who claims to see ghosts of dead people who don't know they are dead. Cole also has bruises and becomes hysterical when friends lock him up. On a funeral, Cole gives a tape of a ghost of a deceased girl and gives it to her father: there it is shown how some lady poisoned her. Cole calms down. But Malcolm discovers he himself is a ghost, because Vincent killed him.

"The Sixth Sense" caused a lot of hype during its release, yet today one can soberly judge and evaluate it, namely as an interesting piece of mystery by the talented and imaginative director M. Night Shyamalan (who also has a cameo in the middle of the film as the doctor), except that the story is incomplete and rather illogical. Namely, there is a plot twist towards the end - something that became Shyamalan's trademark - that involves one character in the film, but the director simply cannot convince us that that character didn't notice anything before or figured his state sooner. Simply, how could he interact with people without not noticing it? It was the crucial detail in the story, a one that fits in marvelously into the big picture, but it simply doesn't seem convincing, except maybe if it's a symbol for something else, namely that even those people who think they are absolutely right on their opinion can be proven wrong. It's also too bad such a plot twist was hastily developed just a few minutes before the end, but Shyamalan has, as always, a special sense for building an atmospheric mood filled with subtle, little details that all plain the attention of the viewers, crafting suspense with wonderfully sustained means. Even though the scene where Cole's mother goes to the kitchen, then exits and then returns a few seconds later only to find all the doors on the closets open is "stolen" from "Poltergeist", "The Sixth Sense" is a rather original and fluent fantasy drama where Bruce Willis steals the show even from Haley Joel Osment as Dr. Malcolm, delivering a refreshingly gentle role.