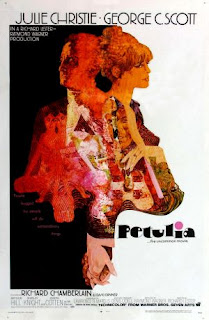 San Francisco. People in wheelchairs are going to a party. Doctor Archie is also there, searching for his coat, but just then the peculiar Petulia throws her arms around him, even though her husband, engineer David, is watching her. Petulia follows Archie on the street up to his hotel room. Then she disappears but returns with a trumpet. Archie doesn't worry about her because he has bigger problems with the divorce of his wife and their two kids. But even Petulia has problems because she once brought Mexican boy Olivar to her house and angered David. Archie spends the night with her, but later finds her beaten by David. Next year, Petulia leaves for an operation.

Director Richard Lester crammed really everything in the romantic farce "Petulia": psychedelic colors, distorted editing, twisted humor (penguins in a water circus whose beaks are cowered by a 5.000 $ insurance), regression of the story into past (Petulia spots a sparkle on a wheel of a car and remembers the hasty moment where a car ran over boy Olivar who ended in a hospital), serious drama...But even though it may seem the movie is too wacky to work, he actually neatly arranged all those elements and placed it into an orderly whole, so some critics consider this an unknown classic, even though some have lamented about it's confusing nature and lack of charm. The movie is actually very amusing if one can get "adjusted" to it's level: for instance, the exposition is very funny because it displays soundless lifting of people in wheelchairs in an elevator that is numerously "interrupted" by short, loud scenes of a concert that are inter cut between them, while George C. Scott is excellent in his role (especially hilarious in the scene where he is running with his kids through the empty Alcatraz). Julie Christie is also good, thus "Petulia" remains an odd allegory about the fragility of love relationships between two outsiders who find each other in the strangest ways.