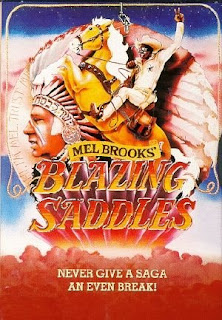 1874. The sneaky tycoon Headley wants to wipe out the small town Rock Ridge in order to finish the route for his railroad. In order to do this, he hires bandits who terrorize it's inhabitants, while at the same time the African American slave Bart is hired to be the Sheriff of that racist town. But with the help of Waco the Kid, Bart prevails over every threat, from the giant hooligan Mongo up to the prostitute Lilli who was hired to seduce him. The inhabitants build a fake town and defeat Headley.

One of Mel Brooks' funniest films isn't at the same time one of his finest due to chaotic writing, discursive story and a few silly exaggerations that make it seem literally like a stupid cartoon: the high average grade of 8/10 on the site Rotten-tomatoes.com is overrated, but despite the fact that "Blazing Saddles" is exclusively just a flat comedy, it has just enough sharp, satirical jokes to work. To Brooks, nothing is holly: he mocks racism, antisemitism, western cliches and heroic epics by placing an African American as the Sheriff in the leading role, and thus the range of the jokes goes from childishly sweet (executioner Boris placed a sling on a horse and it's rider in order to hang them), vulgar (the farting of the cowboys who eat beans) up to the burlesque theater of the absurd (in the finale, in one American studio, one actor dressed as Adolf Hitler enjoys his lunch break and talks with his colleague on the table - "When will the film be finished, Joey?" - "Soon. Today we shoot the bunker scene" - when all of a sudden the good and the bad cowboys crash the wall, enter the studio and randomly start a whole epic fist fight), and even though due to the primitive nature some will not be able to build up their opinion on the film, those willing to simply forget logic and emerge into the surreal spectacle of the absurd will find enough to satisfy them.