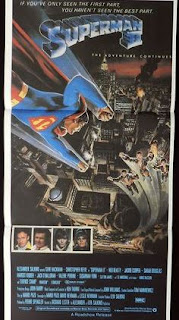 Clark Kent still works as a reporter for Daily Planet, always wearing giant glasses to hide he is actually Superman. In one of his attempts, he saves Lois and the whole Paris when he throws a hydrogen bomb, placed by some criminals at the Eiffel Tower, into space, but it detonates and destroys the prison that held Kryptonians villains Zod, Non and Ursa, who quickly discover they have special superhuman powers on Earth. They cause chaos and even storm the White House, claiming to be the new rulers of the world, but Superman confronts them. On his fortress on the North Pole, he tricks them and drains their powers, defeating them.

The first "Superman" film was very expensive with its budget of 45 million $, but director Richard Donner, following the principle of "Lord of the Rings", was also filming the second part at the same time - until somewhere half way into his job he was fired by the greedy and infamous Salkind producers, who replaced him with Richard Lester. Thus it's a real miracle that "Superman 2" still turned out better than the bland original since Lester replaced Donner's mysticism and straight forward approach with irony. Despite the cheesy costumes, tedious story and occasional empty walk in the first half, the film works specially thanks to that humor that makes it almost seem like a comedy at moments. The whole action sequence in which Superman is fighting with the three super-villains is simply genius. For instance, when Superman goes to attack one of the passers on the street starts playing 'charge' on his trumpet, while an other one wears a sign saying: "The end of the world is near". Superman also diverts the laser towards Zod and fries him (behind him, only a poster with a photo of a woman remains), kicks the mute bad guy Non out of the sever and sends him flying through a building, while the super-breath causes the people blowing back, and even one ice cream flying into the face of some guy. All this is done with a rarely seen ingenuity when superhero movies are in question, still standing as a monument to classic, 'good-old-school' special effects in its best form. The authors know that a superhero story is only as good as the conflict in it, and thus they give Superman three worthy rivals in this edition, and an extra obstacle of losing his powers, which gives the story suspense, since it is not certain if he can pull it off this time, which engages the viewers more. Even though there are a lot of plot holes and rather predictable and pretentious subplots (the one involving Clark Kent loosing his super-powers is especially annoying), "Superman 2" is till date the best Superman film in cinema.