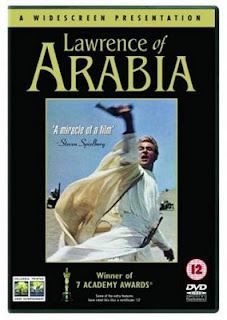 World War I, Cairo. The British army sends lieutenant T.E. Lawrence deeply into the Arab peninsula in order to find prince Feisal and "estimate the situation" against their enemy, the Ottoman Empire. But Lawrence quickly blends in with the area, becomes friends with the mighty Ali and Auda, unites the rivaling Arab tribes and starts an attack against the Turkish army that controls their territory. After he leads the Arabs to victory in Aquaba and Damascus, he gets dismissed, the Ottoman Empire dissolves while the British army turns Arab countries into colonies.

One of Spielberg's favorite films, adventure epic "Lawrence of Arabia" won numerous awards and kindliness of the critics despite a few historical inaccuracies, making even some state that even the best modern films can't even touch it. Sometimes fascinating, sometimes stiff and schematic, "Lawrence" is at its best when it plays out in the suggestive landscapes of deserts, by which it gains a highly stylish tone: the hidden leitmotiv is the everlasting nature of some things as opposed to futile actions of individuals who try to change the world. One of the movie's trademarks is the fact that it's almost a one-man-show that centres entirely around the unusual character of T.E. Lawrence, a British lieutenant who was bored with his life, eager for adventure and different cultures - the thing that attracted Lean is almost unbelievable historical irony that not an Arab, but actually a British achieved the impossible: to unite all those rivalling Arab tribes against the Turks and awaken their national identity.

Among the intriguing sequences is the one in which the hero and his group of Arab friends succeed to cross the dangerous desert and get to Aquaba, but he decides to go back to get a missing colleague and challenge the destiny because "nothing is written". When asked why he likes the desert so much, he replies with: "Because it's so clean". But even the images are great, like the one in which Lawrence is at night walking through the dunes or the classic scene where Ali "emerges" from a Fata Morgana; the four hours or running time pass smoothly while Lean once again gives a subtle slap to his homeland's past for its shameful era of colonialism, but it is a pity that the finale is mild, dry and unexciting: the opening act has some wonderful moments, and one gets the impression you could watch the friendship of these characters throughout the World War I, but then the pace suddenly starts to rush in the final act, and thus the fall of Damascus is only mentioned once off screen, and not shown, as if the film crew is sprinting to get to the finish line. Maurice Jarre's opening score is pure magic in the opening credits, but is sadly never repeated again, whereas the fact that there are no women in the story, Lean managed to subtly emphasize Lawrence's possible gay side. The movie still could have been better if in the end the authors delivered a real point about the search for identity in this world or added more emotions in an otherwise 'distant' story.