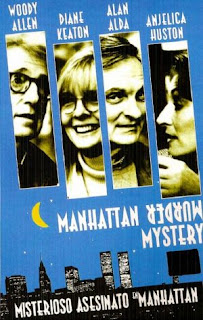 Larry and Carol, a married couple, return to their apartment after a hockey game and meet the mysterious Mr. Paul and his wife who invites them to diner. The next day the woman s found dead while Carol suspects Paul is the perpetrator, even though she died from a heart attack. Carol sneaks in into their apartment and hides under the bed, overhearing Paul's mysterious phone call. Larry is sick and tired of Carol's suspicion and doesn't believe that she saw the woman alive, until he meets her himself. But they find her dead in a hotel and follow Paul with a car who throws the body into the fire. Larry's friend Ted figures everything out: a rich old lady died who looked remarkably like Paul's wife, so he presented her corpse as his wife, while his wife was playing her and got a lot of money - until he killed her. Larry blackmails him, but Paul is killed by a jealous mistress in the cinema.

As much as "Manhattan Murder Mystery" is an acceptable film, it's as much an overstretched one: Woody Allen wanted to appeal to the wider audience by inserting (mild) crime and thriller elements, but the result is often boring, never managing to ignite some sort of Agatha Christie or Hitchcock whodunit charm, while only Diane Keaton was nominated for a Golden Globe (best actress in a musical or comedy) and Anjelica Huston for a BAFTA (best supporting actress). Keaton and Allen as the insecure detective couple are not funny at all, so that as a whole the film is saved by the wacky Alan Alda (in one scene, he audaciously claims that "a crematorium of the body is done only by those who want to prevent an autopsy") and an ironic ending involving a lot of smashed mirrors, causing the protagonist to declare: "We need the police...and a glass man". There could have been a lot more highlights pulled out of that concept that didn't connect fully to the appeal of mystery.