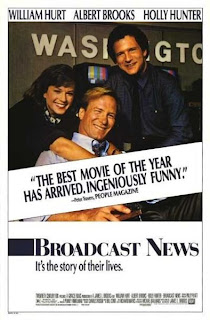 Jane is an ambitious TV producer who works in the same studio as reporter Aaron who is in love with her. On a conference, she delivers a boring speech, but attracts the attention of journalist Tom who becomes her friends and finds a job at her TV station as the anchorman. Tom isn't educated in that field and is impressed when Jane and Aaron make a report about a conflict in Latin America, yet he himself shines when he reports about breaking news involving the attack of a Libyan war plane on an American base. Jane and Tom come closer, which hits Aaron who isn't popular among the viewers. Tom goes to London, Aaron quits. 7 years later, Tom is engaged to Lila, Aaron has a child while Jane is single.

Excellent tragicomedy "Broadcast News" was nominated for 7 Oscars (including best picture and the entire cast) and 5 Golden Globes, while it won 5 New York Film Critics Circle Awards, including best film, director and screenplay. The movie owns much of that success to the humane author James L. Brooks who leads the story as a mix between humor and melancholy, just like in all of his films, thus showing how it is sometimes more interesting to observe the problems of providing and making TV news than just to observe TV news alone. A special spark give shrill characters and unusual situations they get into: Albert Brooks is great as the cynical Aaron - when he doesn't get the expected congratulation for his report from the respected Bill Rorich (Jack Nicholson in a small cameo), everyone in the room starts to stare at him in an anxious way, so he bends forwards and whispers his friend Jane to pretend as if he just told something funny, she bursts into laughter and thus saves him by hiding his public disappointment. Though the story is simple and accessible, it has enough interesting romantic entanglements, like when Aaron finds out Jane is in love with Tom, and shocked, at first, gets out of the house in order to return later on and humorously tries to convince her that that man is the devil. Brooks' touching splice between cynical humor and humanism in advantage of the latter one sometimes works, sometimes not, but in that intention he is always very consistent.