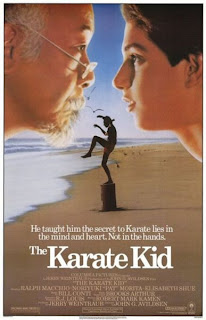 Teenager Daniel and his mother move from New Jersey to California. There Daniel meets a girl named Ali and falls in love with her, but gets the target of aggressions from her jealous ex-boyfriend Johnny, a karate trainee. When Johnny and his friends beat him up one evening, he is saved by janitor Miyagi, who agrees to teach him karate. Though his methods are unorthodox, Miyagi learns Daniel a great deal and he wins against Johnny in a karate tournament.

Nostalgic coming-of-age semi-classic "The Karate Kid" seems slightly dated today due to its amateurish execution, but its charm, honest sympathy for the underdog who wins despite all odds and neat incorporation of Eastern wisdom still give it appeal. The strongest ingredient in the story is the realistic feel of problems of teenagehood - even though Johnny and his gang seem like over-the-top cliche bad guys, it is hard not to chill at their methods of mockery, degradation and picking upon the weaker hero Daniel. Noriyuki 'Pat' Morita delivered a sympathetic performance as the karate master Miyagi, for which he was even nominated for several awards: truth be told, his character does not come off as wise as the authors would have liked him to be, and he sometimes even seems like a con artist when he trains Daniel karate by letting him wax the cars or wash the floor - according to him, car wash employees should be the best fighters in the world - yet the message and the honesty of the story are there.