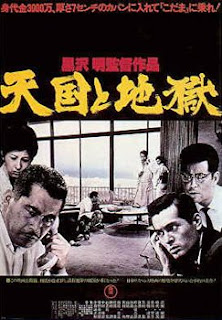 Tycoon Kingo Gondo is put under pressure to make worse shoes in order to boost the production of his company that is faced with the danger of closing down. Gondo puts a loan on his house and gathers 50 million Yen in order to buy off the company, but then some criminal contacts him and tells him he kidnapped his son, demanding 30 million - until he finds out that the kidnappers have mistakenly kidnapped the son of the chauffeur instead. Still, Gondo listens to the police and accepts to pay for the boy, throwing the ransom money in a briefcase out of the train just as he was instructed. After the kid is released, the police discover two corpses at the home of the kidnappers. They finally discover that the kidnapper is a medical intern from a nearby hospital, living near Gondo, and arrest him.

"High and Low" is an unusual and impressively made film that was made at the end of Akira Kurosawa's most prominent director's phase. Kurosawa interestingly transported the American type of kidnapping on the Japanese climate that somewhat lives thanks it's contrast - in the first half, the static touch prevails, while in the second one the dynamic crime elements, where the police are looking for the kidnapper, takes the upper hand. Still, "High and Low" is not one of the highlights in Kurosawa's career who isn't in top-notch shape, failing to insert a few extravaganzas in the rather mechanical story, but he persistently leads his style up to the very end. A correct and decent ambitious crime drama, but with a few mild disadvantages, among them definitely the fact that the film doesn't seem exciting enough, but mildly tiresome, as if the director wasn't able to fill out the long running time appropriately.