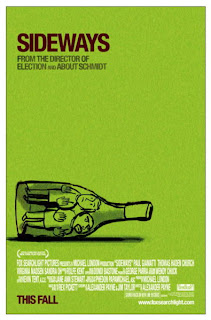 Two down and out middle aged friends; Miles, a divorced English teacher who wants to publish a book, and Jack, a TV actor, go on a one week journey through Santa Ynez Valley wine country, hoping to enjoy their lives before Jack gets married to Christine next week. Staying in a hotel, they meet Stephanie, a winery employee, and Jack starts an affair with her, while Miles wants to come closer with waitress Maya whoa admires his intellect, but is too shy to try. Eventually, Stephanie discovers Jack is engaged and beats him up, while Maya distances herself from Miles. After another affair, Jack returns to Christine and they wed, where Miles meets his ex-wife again, now married to another man. Maya calls Miles and he knocks on her door.

Winner of 2 Golden Globes (best motion picture - musical or comedy, screenplay), one Oscar and one BAFTA (screenplay), "Sideways" is a quiet and calm intellectual tragicomedy, offering a whole daisy wheel of observations about life and - surprisingly - wine. Of course, even though it's an intellectual comedy, director and writer Alexander Payne is a guarantee for some bizarre situations for the "lower" tastes, yet mostly stays in the mature zone and once again shows his biggest virtue - his clear sympathy for losers, thus his anti-hero Miles is one of the greatest outsider characters that graced the screen, played marvelously by Paul Giamatti who deservedly won the New York Film Critics Circle Award. On the other hand, his partner Jack is slightly annoying and takes away too much time of the film, wasting it on playing his self-righteous image. Even though the movie's build up starts to improve after the mild first 15 minutes, it's also a pity that the character of Maya (excellent Vrigina Madsen) is underused, when it's clear that she is one of the highlights of the story - it would have definitely been better if Payne had written more of such sophisticated scenes like the one where she gives Miles a poetic rant about her love for wine, saying how "wine lives", wondering how the weather was while it developed and, if the wine is especially old, how many people died during that time span, than such grotesque one where Miles gets Jack's wallet back and runs away from the house to his car, while an angry naked man is chasing him on the street. It's a matter of another quality made Payne film where the viewer must use his effort to get the point, instead of the point coming smoothly to him without a problem.